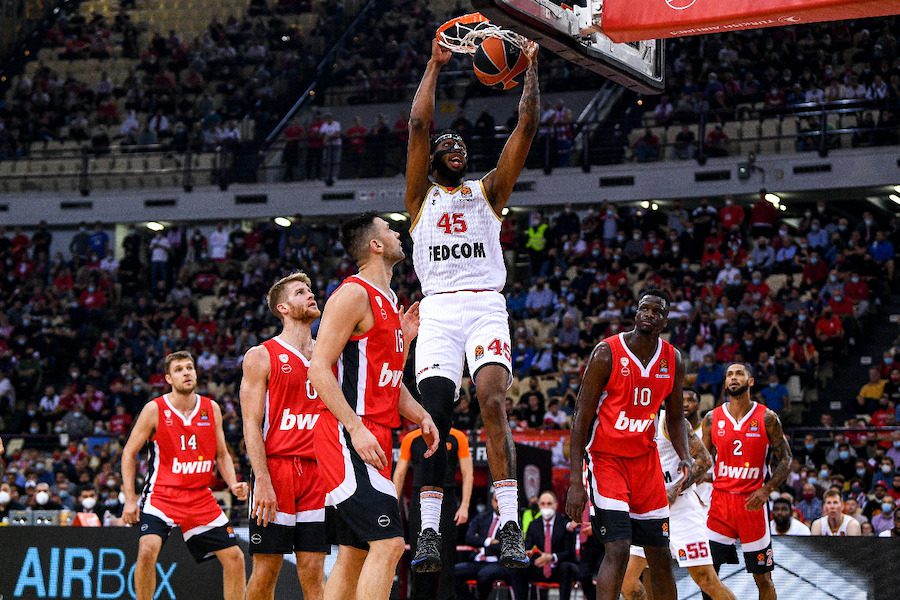 After an impressive week which saw Monaco basket register four victories in seven days, La Roca team experienced a sobering weekend, falling to defeat in both their Euroleague and domestic league matches.
The Roca team started strongly in the first quarter against Olympiacos in Greece. Two three-pointers from Alpha Diallo took Monaco basket into an early lead, which was then extended thanks to a three-pointer from Andjusic, and an impressive three-pointer from nine metres from American Mike James.
ASM finished the first quarter with a sizable 27-17 lead, which looked difficult to overturn for Olympiacos, but overturn it they did. In the second-quarter, Mitrovic’s side started to lose control, with Sloukas and Walkup inflicting most of the damage.
By half-time ASM had all but squandered their 10-point lead and went in with a lead of only three points. If the first-half was a tight affair, then the second-half was anything but. Olympiacos blitzed the Roca team and took both the third and fourth quarters in emphatic style (24-14 and 27-13). Livio and Dorsey were imperious for Olympiacos, both of them finishing with 18 points, and ultimately condemning ASM basket to an 86-65 defeat.
Mitrovic made his displeasure known post-match with a scathing assessment of the heavy defeat, saying: “Unfortunately we missed everything. Especially our leaders, our best players did nothing tonight, and we’ve lost the match.”
Mitrovic’s words didn’t have the desired, galvanising effect, as his side followed up their Euroleague defeat with another defeat to Bourg-en-Bresse in the Betclic league just two days later.
This time outclassed from start to finish, Bourg-en-Bresse took a comprehensive 88-63 victory against a weary-looking Monaco side. Courby and Chassang proved to be a formidable partnership, and they quickly took the game away from the Roca team in the first quarter, as Bourg-en-Bresse raced into a 29-14 lead by the end of the first quarter.
Bourg-en-Bresse, channelling the intensity of the crowd with a highly energetic performance, continued to dominate and went on to win in each quarter, albeit by less emphatic margins than in the first.
Despite a mounting injury list and a tightly-packed Monaco schedule, winger Yakuba Outtara was quick to dispel any question of fatigue post-match. “We didn’t manage to raise our level… Fatigue? It isn’t an excuse, there are 16 high-level players at Monaco.”
AS Monaco basketall will be hoping to get their season back on track when they travel to face Gravelines-Dunkerque on Tuesday.