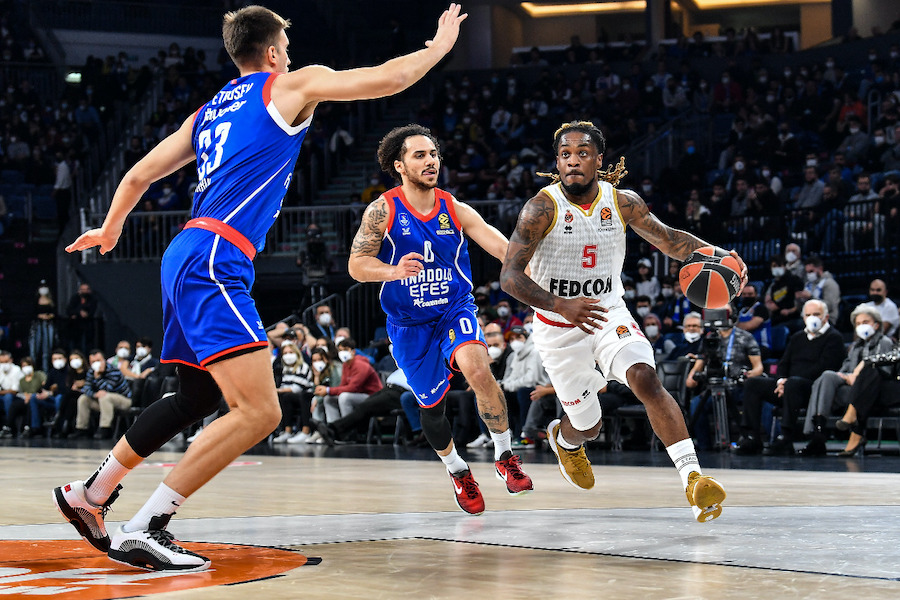 AS Monaco basketball were comprehensively beaten by reigning Euroleague champions Anadolu Efes in Istanbul on Friday to extend their winless away run in the competition to five games. The 98-77 loss also consigned Zvezdan Mitrovic’s men to their second loss in as many days after his side also succumbed to a defeat against Maccabi Tel Aviv on Wednesday evening.
The reigning champions immediately exerted their control on the match, their intelligent movement creating space to register a series of two pointers. Donatas Motiejunas kept Monaco in the game with some accurate finishing, both inside and outside the arc, as the first quarter ended 20-24.
Anadolu Efes slowly grew their lead in the second quarter, their incisive passing setting up a variety of two-point scores, whilst Rodrigue Beaubois scored a sumptuous three-pointer for the Turkish side from the left touchline. The inexhaustible energy of Paris Lee, which created openings for himself as well as his teammates, wasn’t enough to keep the Roca boys in the match as Anadolu took the half 34-20.
Mitrovic’s words at half-time sparked a revival in the third quarter, and a more solid defence limited the Turkish side to only a handful of scoring opportunities. Lee continued to be Monaco’s primary source of creativity, and of points, as his movement on the edge of the arc created half a yard for him to accurately dispatch a three-pointer. A 21-15 triumph for Monaco in the third quarter meant that, going into the final quarter, the Turkish side’s lead was sizeable but not unassailable.
Mitovic’s men immediately got to work in their attempt to reduce the deficit further. ASM started well, with Mike James providing key passes for his teammates to convert. Mid-way through the quarter, Anadolu’s lead had been reduced to a mere six points, but that is as close as Monaco would get.
Chris Singleton immediately replied with a three-pointer, and what then ensued was a carbon-copy of Monaco’s collapse against Tel Aviv just 48 hours earlier. Anadolu took the final quarter 25-16 to secure a comfortable 98-77 victory.
Monaco’s loss against the current European champions was neither unforeseeable nor surprising, but it further highlights their poor away form as well as their inconsistency, which is ultimately preventing Mitrovic’s men from building any momentum.
Post-match, Mitrovic was left rueing his side’s slow start, saying, “We started poorly, and against the most talented team in Europe that can’t happen.”
The Roca team returns to the Salle Gaston Médecin on Friday to face Lyon in the Euroleague, and a win is sorely needed for Monaco if they are to keep in the hunt for the European play-offs.