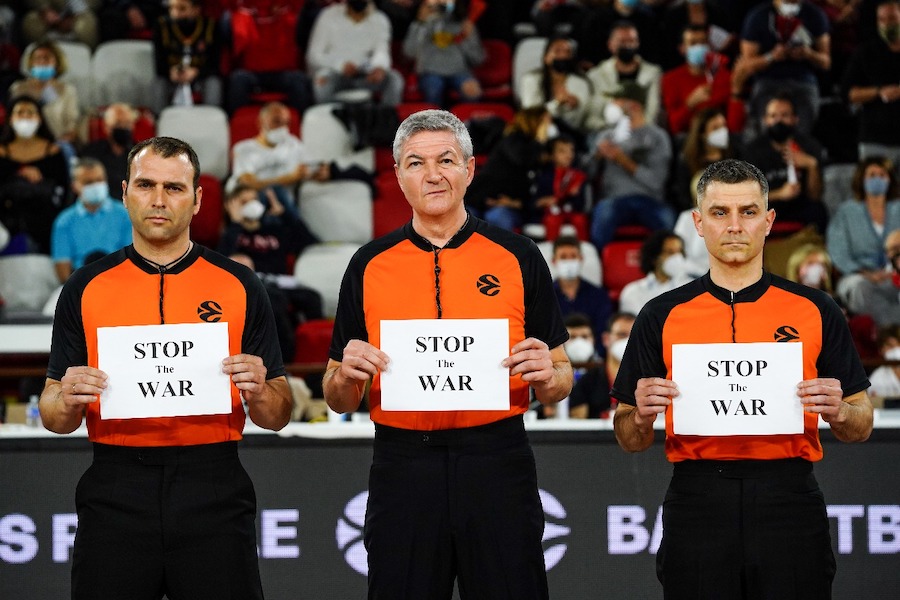 Somewhere between the pre-match display of anti-war sentiment and a post-match interview in which Donatas Motiejunas refused to talk about basketball, a fantastic match broke-out with AS Monaco prevailing on the night (92-78).

Having secured victory against Russian side Unics Kazan on Tuesday night, the Salle Gaston Medecin faithful would be treated to another Euroleague triumph on Friday, this time against Turkish side Fenerbahce.

The match, at times, was of secondary importance to the on-court action, the event bookended by poignant moments of solidarity. Pre-match, referees revealed signs reading “Stop the war”, which was greeted with a round of applause from all inside the hall, including from the club’s Russian President Aleksej Fedoriscev, Ukrainian Vice-President Sergey Dyadechko and Prince Albert II.

The match itself was also punctuated by moments that reminded us of the troubling political context, the Roca Team’s Ukrainian assistant coach Sergiy Gladyr holding up a “Stop War” sign to the camera during one timeout.

Sport, with its power to entertain, provided a welcome distraction, and following Tuesday’s on-the-buzzer victory, home fans once again witnessed a Monaco win, which lifted the side into seventh in the Euroleague.

The victory was, however, earned in a starkly different manner, the home-side powering into an early lead, going on to expertly control their points advantage. An inexplicably easy dunk for the Turkish visitors inside the opening 10 seconds of the encounter alluded to a difficult challenge. And although the first-quarter was a tight affair (19-20), the match effectively ended as a contest in the second, an impressive team performance in which everyone contributed, building an unassailable 22-point gap (55-33).

Motiejunas, Mike James, Will Thomas, Paris Lee and Alpha Diallo all chipped in with significant point contributions, whilst participating in a solid defence, which left Fenerbahce unable to get into an offensive flow.

American Diallo was in particularly hot form, his 24-points on the night a career best in the Euroleague, backing-up his 11-points against Unics.

Despite narrowly losing both second-half quarters, the damage had already been done, and whereas Sasa Obradovic’s men have previously generously handed the opposition a route back into the tie, the same was not to happen here (92-78).

Post-match, Motiejunas was in no mood to talk about what had happened on-court. Asked about the importance of the victory in the context of the hunt for the top-8, the Lithuanian replied, “I think we should take a minute’s silence because of what is going on in Europe right now. Lots of innocent people are dying. Please stop the war in Ukraine. Our thoughts and prayers are with that country right now.”

Obradovic did, however, address his side’s successful outing. “We played great basketball, and we’re really happy with this victory. I am happy for the team because they deserved it. Diallo gave an extraordinary performance.”

Monaco next face a difficult trip to Spain where they will face first-placed side Barcelona on Thursday, with the aim of cementing their play-off place.