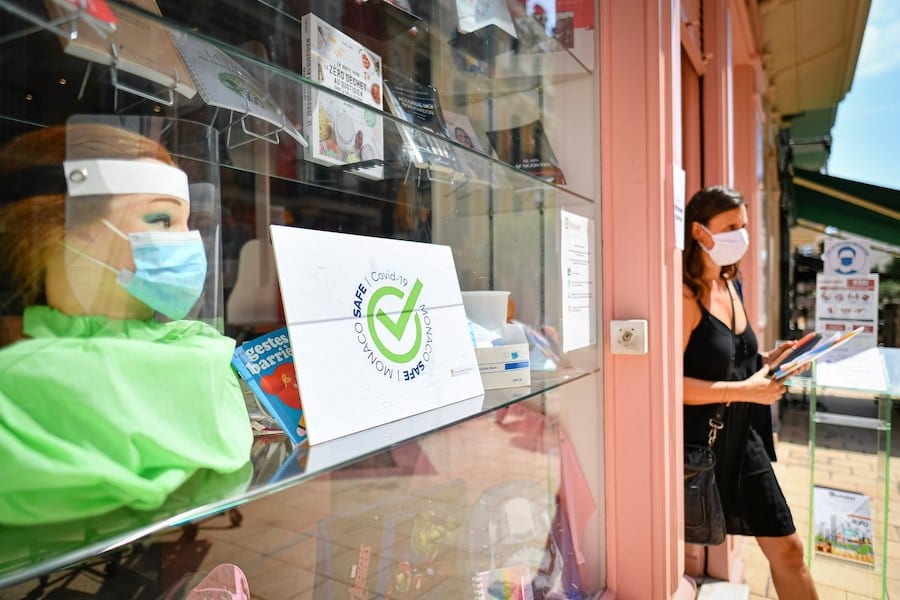 Businesses in the Principality have begun bearing the ‘Monaco Safe’ label, an initiative by the Prince’s government to alert customers to Monaco’s commitment to safety.

Over the next days, signs bearing the ‘Monaco Safe’ logo will be popping up in establishments all over the Principality. These signs have been given to shops, restaurants, hotels, and other public gathering places who have applied for and met the strict rules of compliance set out to receive this status symbol, signifying that they are taking all possible precautions to ensure the health and safety of all who come through their doors.

Welcome Office Chief Laurence Garino delivered the signs to merchants and business operators all over the Principality on Monday 20th July. The recipients were proud to have passed the rigorous test that allowed them to obtain the signs but were equally happy to know that customers and clients will now know they can enter these “safe-haven” establishments with knowledge that their health and well-being is a priority.

The signs are not obligatory and applying for them is free of charge. There is a dedicated teleservice available to assist in processing applicant’s requests in order to process them in the fastest time period possible. In order to obtain permission to use the sign, the establishment must prove they are adhering to the health protocols put out by the government.

Villa Unda Maris, situated just metres from the Oceanographic Museum on the Rock, has gone under the gavel and achieved an eye-watering sale price of €75,300,000.

Blue Economy on board Brazilian ship

André de Montigny, Honorary Consul of Brazil in Monaco; Michael Lodge, Secretary General of the International Seabed Authority; Luciana de Montigny, President of Brasil Monaco Project; Raphael Cuvelier, Secretary General of the Prince Albert II of Monaco Foundation; and Olivier Dufourneaud, Director of the Oceanographic Institute.Photo: Brasil Monaco Project/Philippe Fitte[/caption] The Brasil Monaco Project (BMP) helped organise the “Blue Economy” event, which took place on Monday, April 24, aboard the Brazilian offshore supply ship, Vital de Oliveira, moored in Monaco for the International Hydrographic Organisation’s first Assembly. BMP’s participation was one of many activities over the last five years between Brazil and the Principality, as requested by its President of Honour, Prince Albert. Ms Luciana de Montigny, President of Brasil-Monaco Project and her husband, André de Montigny, Honorary Consul of Brazil in Monaco, work closely with the Prince Albert II of Monaco Foundation, represented by Raphael Cuvelier, as well as Olivier Dufourneaud of the Oceanographic Institute, the President of Monaco Brazil Invest Association, Marcos Pileggi, and Wald Filho, Consul of Monaco in Brazil. In addition, Justin Highman of the Monaco Economic Board also works to stengthen the ties between the two countries. The "Blue Economy" conference is an example of the various activities carried out by the Brasil-Monaco Project, which is also actively participating in the project to install a miniature reproduction of the Prince’s Palace in a park in Gramado in Brazil, a tribute to the Principality and a way of illustrating the strong ties between the two countries. Brasil Monaco Project is also working on the creation of a "Grimaldi Dynasty"-themed parade, which could be presented at the Rio de Janeiro 2019 Carnival, the annual event anticipated by millions of Brazilians and rebroadcast across the world.

The Monaco Economic Board (MEB) recently hosted an event in Turin, Italy featuring the Monte Carlo Ballet in an effort to strengthen bonds between the two regions.

Turin is the undisputed centre of the Piedmont region of Italy. Not only is it the regional capital, it is also the economic hub where success stories abound from a series of companies who have household name-type recognition. It is the home to Fiat, Ferrero, Alessi and Lavazza to name a few, and as a reasonably close physical neighbour to Monaco, building strong ties is in the interest of both.

To that end, the Ambassador of Monaco in Italy, the Honorary Consul of Monaco in Turin, the Turin Chamber of Commerce and the association Destination Ambassador’s Club Monaco organised an event earlier this month to introduce the vast economic opportunities Turin has to offer to 10 interested parties from the Principality.

To entice the movers and shakers further, the event featured an evening performance with the Monte Carlo Ballet at the spectacular Teatro Regio.

The trip could be considered a success, as a few deals came from the meeting. Monaco Inter Expo signed a partnership agreement with Exclusive Brands Torino (EBT) to create lines and products made in Italy. This collaboration allows EBT a place at the Monaco Pavilion at the Expo Dubai 2020 taking place next autumn.

The visit was also a chance for the Monaco Chamber of Commerce to formally sign a Memorandum of Understanding with Turin’s Industrial Union.