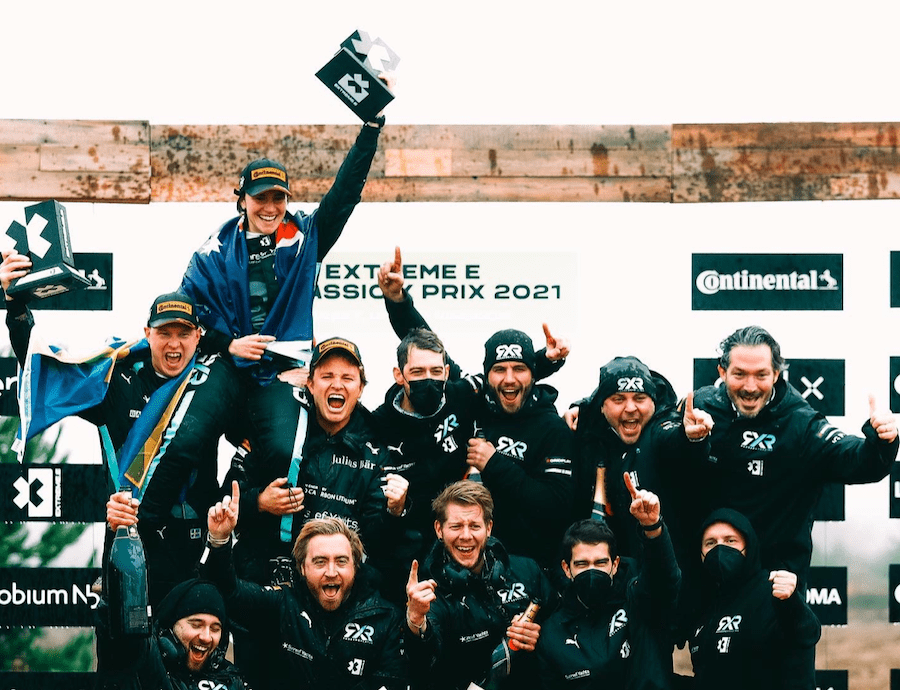 Nico Rosberg’s e-rally team RXR became the inaugural Extreme E champions after securing fourth place in Sunday’s race on the Jurassic Coast in Dorset.
Lewis Hamilton’s X44 team took the victory on the British coast, leaving them level on points with RXR. But with more victories over the course of the season, Sunday’s fourth-place finish was enough to narrowly clinch victory.
RXR drivers Molly Taylor and Johan Kristoffersson qualified for Sunday’s final with ease, finishing first on a rain-drenched circuit.
The pair, however, couldn’t rival the pace shown by X44, with nine-time rally champion Sebastien Loeb and Critina Gutierrez powering the team to victory. RXR began the race well, getting a good launch and finding themselves on the tail of the X44 team. But they soon began to fall down the field, ultimately finishing outside of the podium places.
The fourth-place finish meant that RXR and X44 both finished on 155 points, but having won three out of the five races this season, it was Rosberg’s team who took home the title. Hamilton and Rosberg once again proved almost inseparable during this series, just as the pair were on-track during their time as teammates at Mercedes.
The inaugural season of Extreme E has been an overwhelming success. The series has provided some exhilarating on track action and Rosberg was full of praise for his drivers, saying after the race: “We are so delighted to be crowned the inaugural Extreme E Champions and I am really proud of the entire RXR team.” The Monaco resident added, “The team has worked so hard all season and performed consistently, racing in some of the world’s most remote locations. To be champions is such an honour.”
However, as Rosberg pointed out post-race, there is an off-track race that also needs to be won: “We’re racing to save the planet.”
The high-quality on-track racing has lifted the profile of the series, in turn highlighting the importance of sustainability both in sport, and in society more widely. Extreme E has therefore succeeded in its mission to raise the profile of environmental issues in sport, a cause it will continue to fight for in the 2022 season, which is due to begin in Saudi Arabia in February.