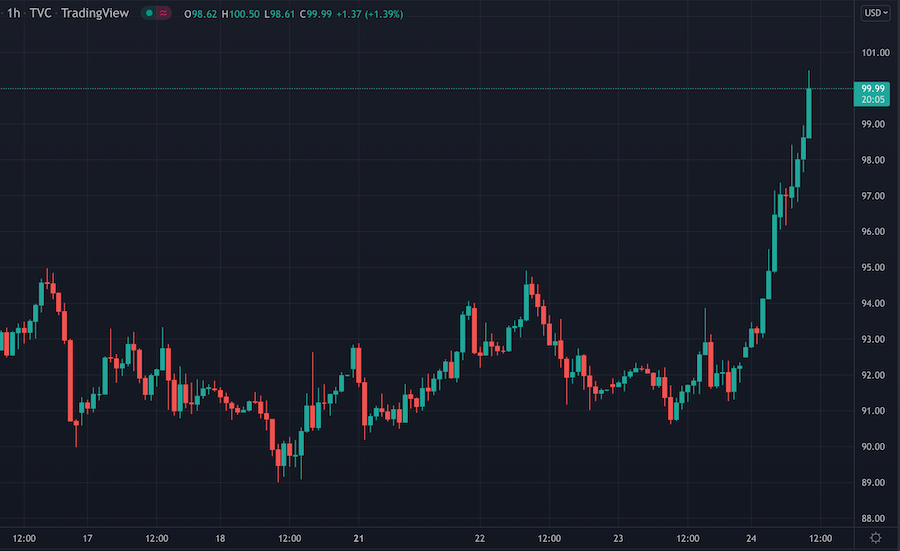 Oil prices have topped $100 a barrel and stock markets took a tumble in the wake of the Russian invasion of Ukraine, with the rouble hitting an all-time low, falling to 86.98 to the dollar, whilst “safe haven” currencies saw a rise.

The world stock markets saw predictable movements in the wake of Russia’s war-provoking attacks on Ukraine on Thursday. European markets opened 2.5% to 4% lower than normal, whilst government bonds, the US dollar, the Japanese yen, the Swiss franc and gold all rallied as investors looked for a safe place to store their assets.

Germany’s DAX was one of the hardest hit, falling 3.7%, mostly due to German reliance on Russian energy and the amounts its companies sell to Russia. The FTSE 100, the UK stock market, was down 2.3%, with losses believed to be limited by the jump in oil prices which have surpassed the $100 a barrel line, the first time this has happened since September 2014.

The Pan-Asian indexes and Europe’s STOXX 600 index for the equities market have both fallen, 2.6% and 2.7 % respectively, with the STOXX hitting its lowest point since May 2021 and a full 10% below January’s record high.

US markets are predicted to follow roughly the same patterns as their European counterparts.

Russia’s currency, the rouble, has weakened by nearly 7%, falling to 86.96 to the dollar. The Russian and Ukraine markets both have gone into freefall, with the Russian market dropping more than 10% after opening was initially suspended.

Much of Europe is reliant on Russian gas, and if the Russian President Vladimir Putin decides to cut the lines, Europe will see natural gas prices go through the roof, adding to the already steep 10% rise experienced this winter.