Saint Tropez to Monaco: A cycling adventure for charity

Saint Tropez to Monaco: A cycling adventure for charity 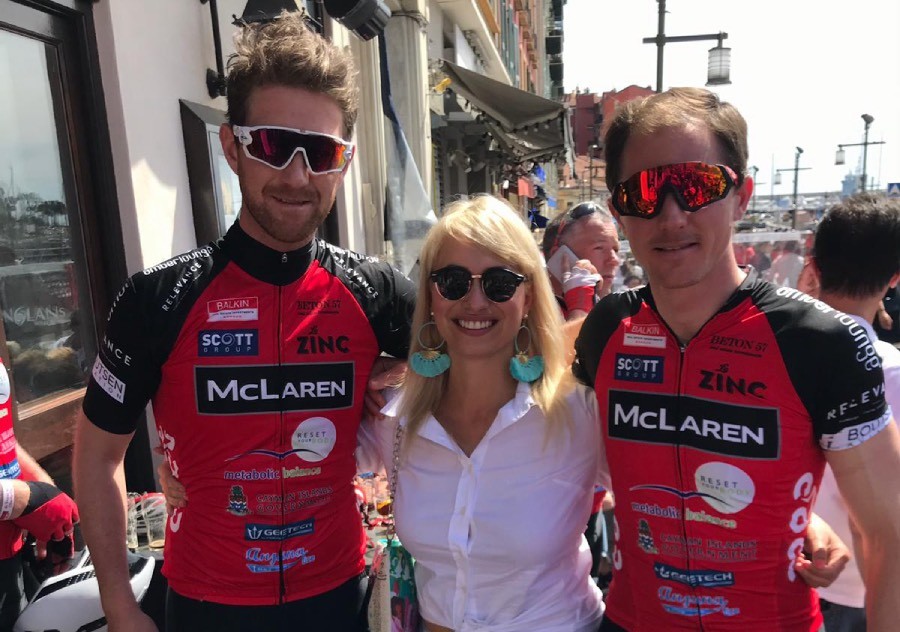 Monaco Life’s Lauren Coles joined riders on the annual COCC on the weekend and learned that, together with champagne and oysters, it is charity that drives the hearts of these cyclists.

The sky was partially cloudy as a gentle wind blew across the port in Saint Tropez. But as the sun rose, the wind got stronger. Gary Sacks woke from his cabin aboard motor yacht Lizzi. He’d sailed there from Port de la Rague after arriving in a prop jet from London with Tom Upton. Along with Monaco local Kevin Bonnie, the group had tracked their way across air and sea to the jewel of the French Riviera for one reason: charity, and the beneficiary was the Princess Charlene Foundation, best known for its projects preventing children from drowning.

“It’s a good excuse to go riding and do something good at the same time,” said Sacks.

The guys were in tight cycling clothes, covered with sponsors’ logos. In the middle on the back was a large IYC logo. Kevin Bonnie, the director of IYC, has been a sponsor and rider at the Champagne and Oysters Cycling Club since its inception in 2012.

“I thought about the cause, the great idea for the ride, the camaraderie of all the people I know in Monaco, and it was fun the first time. I’ve been sponsoring it ever since,” he told me. 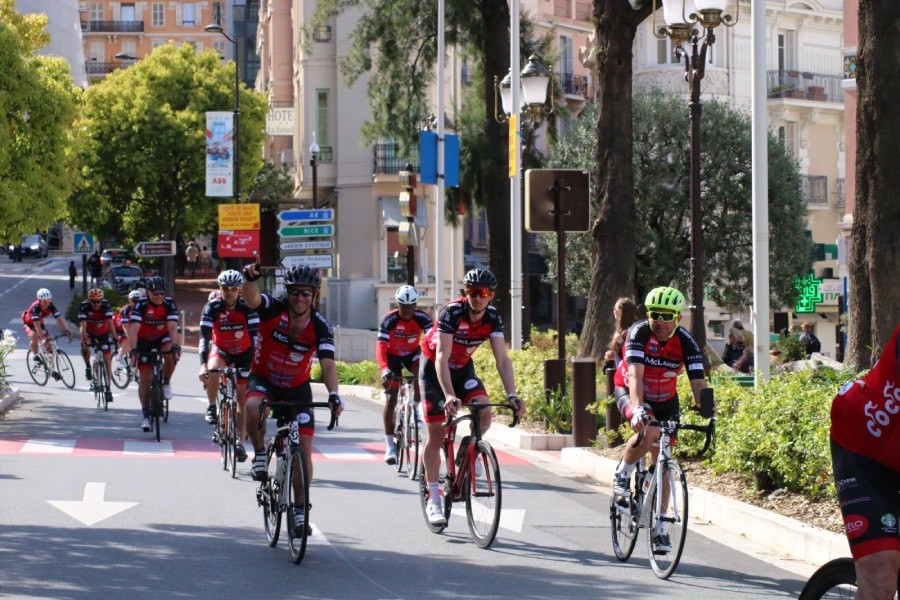 The COCC charity ride was originally a fun way for friends from Monaco to get together for a long cycle, and to fundraise for a good cause. It has now become a tradition and people from all over the world travel to the region to enjoy the ride and support the cause.

The winds got stronger as the clock approached 8am. 105 riders, in their red and black cycling gear, happily stood in a group that reminisced knights in shining armour heading towards a beautiful but treacherous ride, ending in champagne and oysters with the Prince of Monaco. One guest of honour stood out: Alden McLaughlin, Premier of the Cayman Islands.

“The Cayman Islands has a big share of the superyacht market in terms of our shipping registry, so that is why we come to Monaco on a regular basis,” the premier revealed. “In September, we had a reception on one of the yachts and invited Prince Albert. He started asking me what I do, and I told him cycling is one of my interests and passions. He said it is his as well, and he told me about this ride and invited me to come.”

A small entourage of supporters cheered on the premier and his friends Orret Conner (the eldest rider of the day), Andre Tahal and Eric Bush – all involved with the office of the premier. The group travelled together in a van and checked in at almost every stop, while observing some of the most beautiful views in the south of France. The red cliffs of the Esterel were like solid monuments in the background, as riders in red outfits zipped by. The energy was electric. Riders looked exhausted as they arrived at Ma Nolan’s in the port of Nice. Former professional cyclist David Tanner commented: “Everyone pushes themselves for a good cause, and it’s always a great group of people here.”

“The Esterels are a lovely part,” added former professional cyclist Calvin Watson. “The sun has come out. We are sitting here in Nice enjoying a few drinks.”

Nigel Essam revealed how his cycling routine centres around the 140 kilometre ride from Saint Tropez to Monaco. “This is my seventh year. I start training around January until end of April, then I put my bike away for the rest of the year, and don’t pick it up again until January.”

The youngest rider, 15-year-old Patrick Torrison, enjoyed a lunch with his father. “The most challenging part was probably the Esterels,” he said.

And then the riders were off for the last leg. With the sun still shining, the group enjoyed a downhill swoop into Port Hercule with the youngest rider in the lead, finishing up at Stars n’ Bars. Owner Kate Powers greeted guests as she stood by the Prince, and kindly helped this humble intern journalist get a few words from His Serene Highness:

“This is a great, friendly event, not only to promote cycling, exercise and sustainability, but also for my wife’s charity to fight against drowning. Doing exercise and sports in a healthy environment is perfectly aligned with what we are doing here in Monaco, in terms of sustainability and wellbeing, in a cleaner future for all of us.”

Camaraderie continued as the group reunited after a quick rest and clean-up. They looked much more dignified after showering. Riders and their friends and family enjoyed live music and a delicious barbecue in the evening at Slammer’s.

“The event just gets better and better every year,” said organiser Damian Crean. “It has now become a firm fixture in the Monaco calendar but we also had participants this year flying in from The Cayman Islands, Singapore, Dubai, Switzerland and many from the UK – a lot of whom have already confirmed again for next year. The support team did an amazing job again this year; without them, the event could not take place.”

Some people danced until the wee hours, while Gary and Tom returned to the yacht Lizzi in the port at Fontvielle, to rest. In the morning, shortly after sunrise, they awoke to sore bodies but full hearts: all their hard work, and that of all the participants, had raised more than €100,000 for the Princess Charlene Foundation.