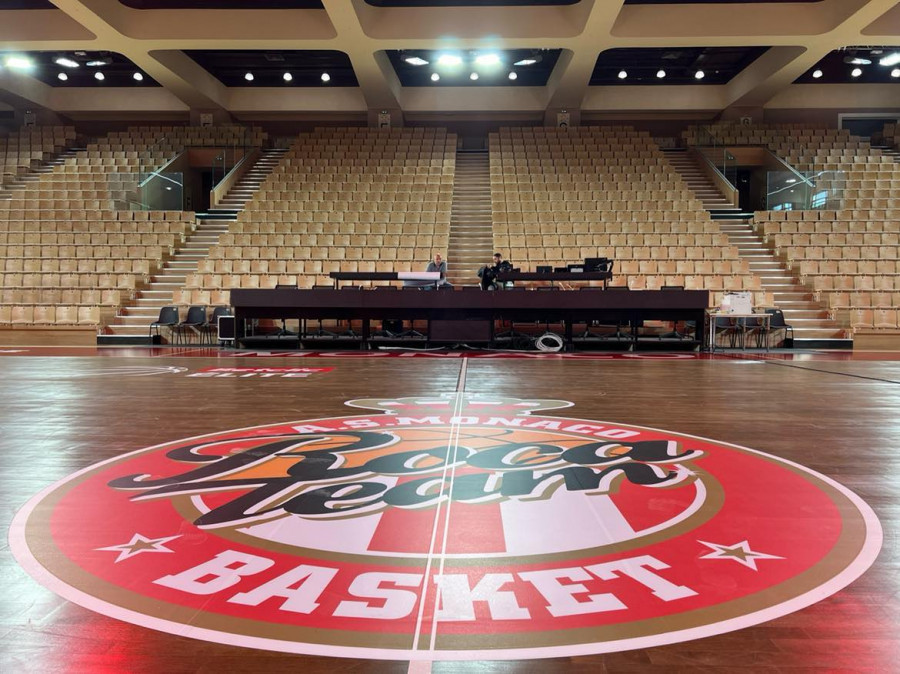 The home of AS Monaco Basketball, Salle Gaston Médecin, has been transformed in just 13 weeks. Sporting a sleek wooden design, an increased capacity court now awaits the returning Roca Team.

Basketball is set to return to the Principality on Sunday when Roanne face AS Monaco Basketball at the Salle Gaston Médecin. Not only will a completely new-look team take to the court, but the surroundings themselves will also be unfamiliar to the Roca Team faithful.

During the 13 weeks that have elapsed since the end of the 2021/22 season, and the beginning of this new campaign, the court has undergone what Monaco’s interior minister Patrice Cellario described as a “significant face-lift”.

Monaco Life on Tuesday attended a press tour of the Roca Team’s almost unrecognisable home court. The first immediately noticeable difference is the seating itself… and how much of it there is. Cellario announced that Monaco will be able to host just under 4,600 fans for their Betclic Elite and Euroleague campaigns this season.

The increased capacity at the Salle Gaston Médecin is not just in recognition of the growing popularity of the sport in the Principality, it is also the consequence of strict Euroleague regulations regarding stadia capacity. The European competition, the biggest outside of the USA, has already given the green light to this new hall.

Without the ability to lift the roof of the hall, the Monégasuqe authorities, along with the club itself, have had to be imaginative in their redevelopment plans. The edges of the previously square stands have been rounded, whilst the seating in the upper tiers has been significantly increased. The result of this, according to AS Monaco Basketball vice-president Paul Masseron, is the creation of a “real cauldron”. He added, “Fans will be particularly surprised and in awe [of the new hall.]” The atmosphere within the hall will also be aided by the creation of a ‘kop’ in the south stand.

The uniformity of the seats themselves also stands out. The monolithic wooden stands, one of which goes from courtside, all the way up to the roof gives the court what Masseron describes as a “warm” atmosphere. “I think it’s the only stadium in the French championship that is totally wooden. It’s very impressive and it also gives the hall a very warm character.” As well as providing a warm aesthetic, the use of wood is also an environmental measure, with the source material for the seats and stands coming from France.

It’s a good job that the raw materials for the renovation haven’t come far, given the extremely tight schedule that was set. In some ways, the Roca Team are victims of their own success, as work could only begin after the denouément of the 2021/22 season. As a result of reaching the final of the Betclic Elite, and taking it to a fifth and final game, work could only begin at the end of June.

“The time on site has been significantly reduced,” began Cellario. “Obviously we had to allow the Roca Team to finish last season, which finished in mid-June as a result of their incredible sporting results, whilst also giving them back their court for the start of the new season (2nd October). There were only 13 weeks on-site, 13 weeks to completely transform the hall… there is enormous pride and gratitude to the team that have carried out this operation in such a short space of time and worked flat out in order to achieve the results that you see today.”

He continued, “We are now passing our baby on to the Roca Team so that they can take up the challenge on a sporting level, and allow us to dream again this season.”

It’s all change at AS Monaco Basketball; a new-look roster will take to a transformed Salle Gaston Médecin this weekend. Whilst the aesthetics, and some components of the club will be unfamiliar during the meeting against Roanne in the Betclic Elite, the ambition of the club remains unaltered and clearly discernible. Their brand new hall attests once again to that ambition.