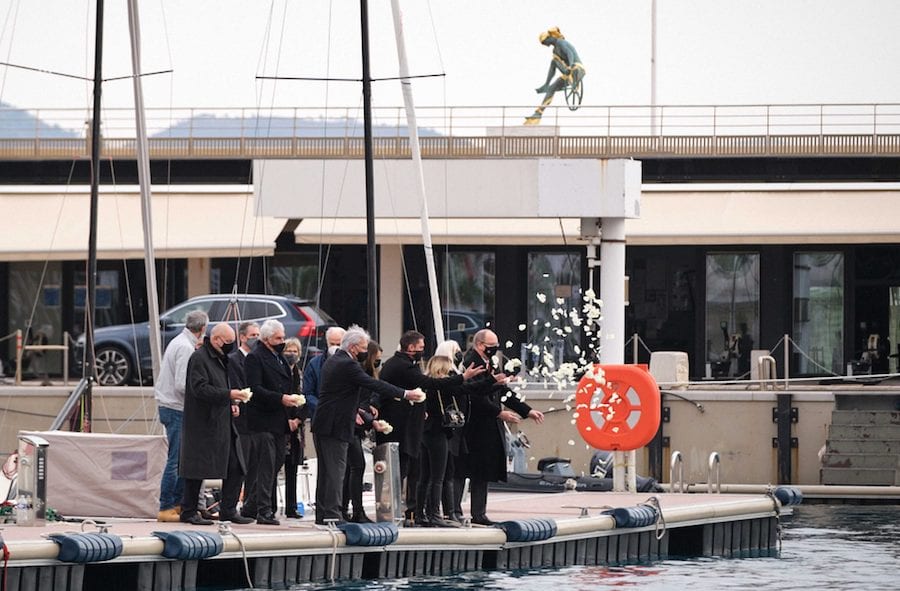 Prince Albert has joined friends, family and colleagues of Jean-Marc Giraldi for a fitting send-off at the Yacht Club of Monaco. The President of the Nautical Society of Monaco and Vice-President of the International Moto-Nautical Union passed away on 28th January from complications related to Covid. He was 62.

It is clear that Jean-Marc Giraldi left his mark on the Principality, evidenced by the turn out for his memorial service on Saturday 6th February.

As a man whose life revolved around the sea, it was more than fitting that his farewell be on the water. It was a solemn and dignified ceremony, during which the relics of Monaco’s patron saint, Saint Devote, were presented, while rose petals were thrown into the sea and fog horns from surrounding boats punctuated the winter silence in a mournful homage.

Giraldi, a native of Menton, discovered a love for rowing at an early age and was a stand-out from the start.

“Spotted by Jean-Louis Antognelli, he joined the Monegasque club in the mid-1970s with his brother Philippe. He became a trainer there,” says the Monaco Nautical Society in a press statement.

Rowing led him to practice other sports including power boating – becoming the 2000’s offshore World Champion, jet-skiing, and in 1988 he even tried out for Prince Albert’s Olympic bobsled team. Though he didn’t make the cut, the two men became life-long friends.

Ü Presidente, as he liked to be called, was also treasurer of the International Moto-Nautical Union in addition to President of the Nautical Society.

“Always present on the Quai Louis II, attentive to people and in detail, his stentorian voice resonated until the end of December 2020, when his fight against Covid-19 began,” the Nautical Society said. “He leaves behind an immense void and an example of righteousness, benevolence, intelligence and loyalty.”