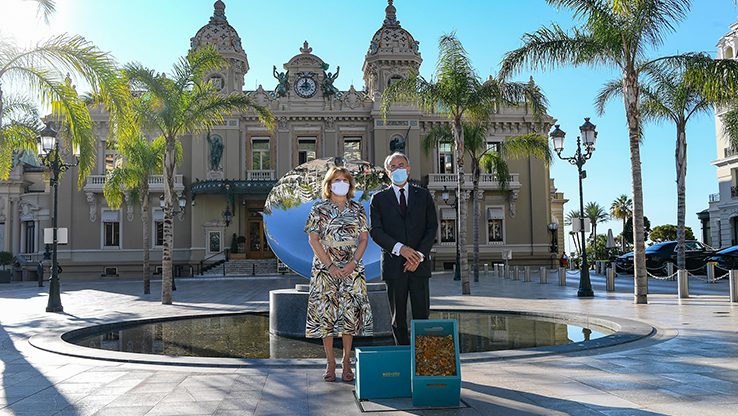 The Société des Bains de Mer has handed over 115kg of coins collected in four fountains at the Carré d’Or to Fight Aids Monaco, equalling about €3,500 for the Princess Stephanie-led charity.

Making a wish whilst tossing a coin in a fountain has been a long-standing tradition, but in the case of the four fountains in the Carre d’Or section of Monaco, the coins will not only benefit the coin thrower, but will make dreams for others come true.

The fountains, maintained by the Société des Bains de Mer (SBM), had collected some 115 kilograms of coins over the past 18 months. When emptied recently, the haul came to an estimated €3,500 worth. This number came after counting the value of a single kilo of coins, then multiplying the amount by the weight.

“We were not going to keep all these coins,” said Jean-Luc Biamonti, CEO of the SBM. “We then thought of donating the amount to charity and our choice ultimately fell on Fight AIDS Monaco, which is a great cause for us.”

The act, he said, may be repeated in the months and years to come, “when a reasonable sum is reached again.”

The decision to make the coins a gift also has a practical side.

“You have to know that the parts end up damaging the fountains. We have to remove them, and this is an operation that we repeat often,” Biamonti explained.

The handover took place on Thursday morning when the Deputy Chairman made the donation to Christine Barca, who was there representing Fight AIDS Monaco.

Barca, the General Secretary of the association, thanked SBM, saying that the move “once again proves its loyalty.”

A meeting will soon take place between Princess Stephanie and the charity’s Board of Directors to determine how to best use the unexpected windfall.

“It is quite possible that this sum will be used for the weekends of resourcing of the affiliates that we have in the Principality,” said Ms Barca. In any case, the tidy sum will no doubt be put to good use for a good cause.