Securing the Jardin Exotique for centuries to come

Securing the Jardin Exotique for centuries to come 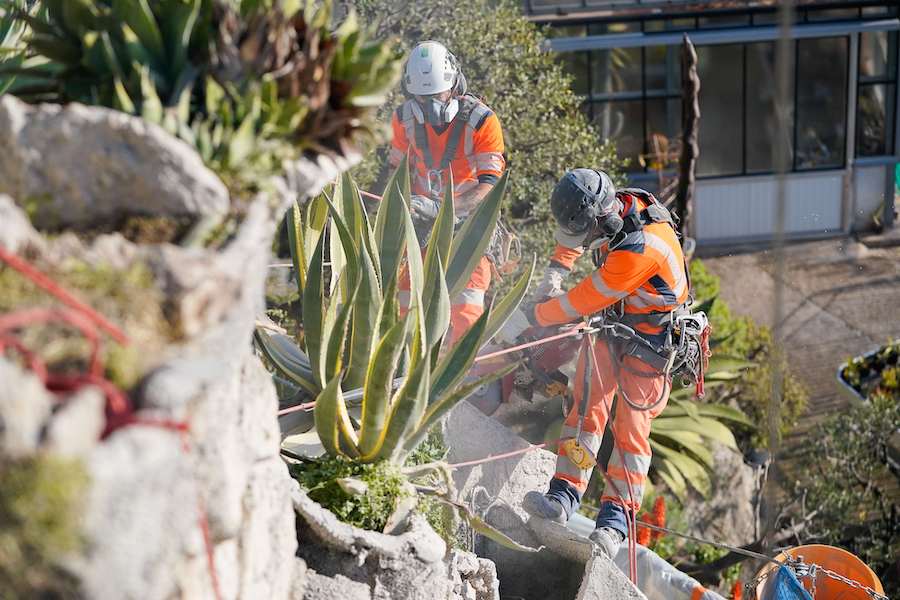 The Jardin Exotique will remain closed to the public until 2022 as the council battles unexpected hurdles renovating one of Monaco’s national landmarks.
After the end of the first lockdown in May of 2020, the Jardin Exotique started undergoing long-overdue restoration projects that were expected to last only a few months.
When the actual work began, François Lallemand, the Deputy Mayor, and Benjamin Marchal, Head of Municipal Technical Services, realised the task was much more complex than initially thought, as the site itself has topographical constraints, making transportation of machinery and materials particularly difficult. Add to that the lack of documentation from when the site was first created between 1913 and 1933, and the revamp has proven to be a far larger job than anticipated.
In order to create a safer locale, demolition of artificial rock structures on or near the public path needed to come down. This work began last summer and continues throughout several sectors of the garden. The most dangerous man-made structures on the Cap d’Ail side have now been secured, with the Menton side receiving attention all this year. Once the sites are deemed safe, reconstruction efforts will start by rebuilding new rock formations.
Footbridges are also receiving an overhaul. By the end of March, four will have been replaced. The majority of this work is done at night, making the job that much more complicated as it is necessary to block traffic on Boulevard du Jardin Exotique in order to complete the works.
In the end, a total of nine footbridges will be replaced. When complete, the bridges will have the same look as when they were first designed, ensuring the integrity of the site as it was first imagined over a century ago.
The cost of the works will come in at €1.16 million, a sum that was voted on unanimously by the Municipal Council. Securing the artificial rock structures will cost €600,000 and another €500,000 was earmarked for the reparation of the four bridges. Another €100,000 has been used for land studies, surveys and tests. The final phase of the works will be taken over by the government.
In addition to construction workers, the site has their usual staff of gardeners who are on hand to maintain the precious plants, as well as to temporarily move them when required.
As there are thousands of species harboured at the Jardin Exotique, some centuries old, one of the primary concerns is the protection of as many plants as possible. To this end, modernisation projects including refurbishment of rainwater drainage paths, updating irrigation systems and installing new lighting networks are part of the overall project, in the hope that in 2022, the public will be able to enjoy a new look whilst preserving the best elements of the past.