See winners of the photographic contest RAMOGE Man and the Sea 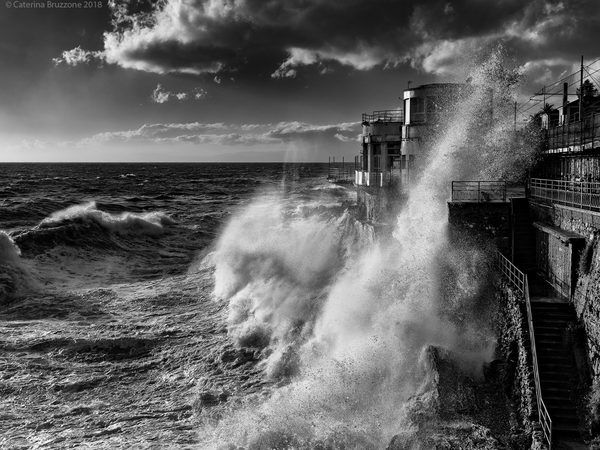 Launched in June 2018, under the auspices of the International Federation of Photographic Art (FIAP) by the RAMOGE Agreement, the photographic competition on the theme “Man and the Sea” has designated its laureates.

The jury, composed of a representative of the French Ministry of Ecological and Solidarity Transition, the Direction of Communication of the Monegasque Government and FIAP, deliberated and awarded, this year, the following prizes:

The RAMOGE agreement congratulates the laureates and thanks all the candidates for their participation and their creativity.

1st Prize: “The questions of Nervi” by Caterina Bruzzone – Nervi (Genoa Province)
This historic restaurant built in 1913, renovated in the 30’s, closed in 2012, left to the abandonment until today and currently Renovation course to accommodate a 4-star hotel, testifies to the waltz-hesitation between the sea and human occupation. This photo was chosen as the best shot for the beautiful effect it produces, in perfect coherence with the theme, and the excellent timing of the shooting.

2nd Prize: “Even cotylorhiza can be a model” Matei Cucu – Cape Taillat (south of the peninsula of Saint Tropez)

This picture shows that men return to the sea from time to time to pay tribute to him and listen to his stories, and that they happen to meet amazing characters, such as Cotylorhiza tuberculata, more commonly known as “jelly egg fried”. This photo is technically very successful and leaves a pleasant impression. One can only regret that, in the upper part, the fins were truncated.

The composition of this image is very balanced and responds perfectly to the theme by illustrating a junction point between the two worlds.

In the presence of Prince Albert, signature with IO-UPMC's Jean Chambaz and Philippe Taquet. Photo: M. Dagnino[/caption] As part of the inauguration of the Biodiversarium at the Oceanological Observatory of Banyuls-sur-Mer, a partnership agreement between Monaco’s Oceanographic Institute and the University Pierre and Marie Curie was signed on Wednesday, November 29, in the presence of HSH Prince Albert and many personalities. Both institutions are committed to collaborating on marine science, long-term ocean observation and the impact of global warming. Through their partnership, they intend to strengthen their capacities to popularise, promote and disseminate scientific knowledge and the understanding of the marine environment to as wide a public as possible. This is a logical consequence of the long-standing relations maintained by the two institutions, as evidenced by numerous documents in the archives of the Oceanographic Institute, including loans of exhibits such as reversing thermometers for a scientific campaign aboard the Orvet, animal consignments (Pennatules, Bonellies, Cerianthes, Morayes ...) and exchange of publications. The libraries of both institutions have been in constant contact since the early days and several directors of the Oceanological Observatory of Banyuls-sur-Mer served as members of the improvement committee of the Oceanographic Institute. Building on a shared past and in close collaboration, the two bodies have now officially joined forces in the service of ocean protection, in response to the growing need to inform, teach and decrypt the issues related to the marine world. Specifically, assistance will be provided to the scientific missions conducted by Monaco Explorations. Monaco’s Oceanographic Institute –founded in 1906 by the Prince Albert I Foundation –and the Oceanological Observatory of Banyuls want to engage as much as possible to better understand the impact of human activities on the oceans, and to encourage their conservation.

It has just been announced that the Clubhouse in Gustavia will reopen on December 12. However, until a few post-Irma “short-term inconveniences” can be ironed out – no air conditioning, no washing or bathroom facilities, and drinks will be served in disposable cups – opening hours will be limited to between 6 pm and 9 pm. Meanwhile, on Monday, December 18, the Commodore is hosting a soirée in Monaco for Gustavia Yacht Club members from 6:30 pm to 9 pm. Over Christmas drinks and canapés, the gathering is to bring together those members of the Club who have not left yet for warmer climates ahead of the holiday season and to celebrate the New Year. Updates will be given on the preparations to open the Clubhouse in Gustavia, on the status of the IRMA disaster relief fund and the latest on reciprocal arrangements with other Yacht Clubs. Gustavia Yacht Club also hosted a joint event with the Manhattan Yacht Club in New York on December 6, represented by Treasurer Ken Griggs and interim Club Manager Celia Meralikan, who is now in St Barts in an attempt to open the Clubhouse as early as possible. Members who wish to attend the Monaco Christmas cocktail should contact Celia Meralikan at Gustavia Yacht Club.