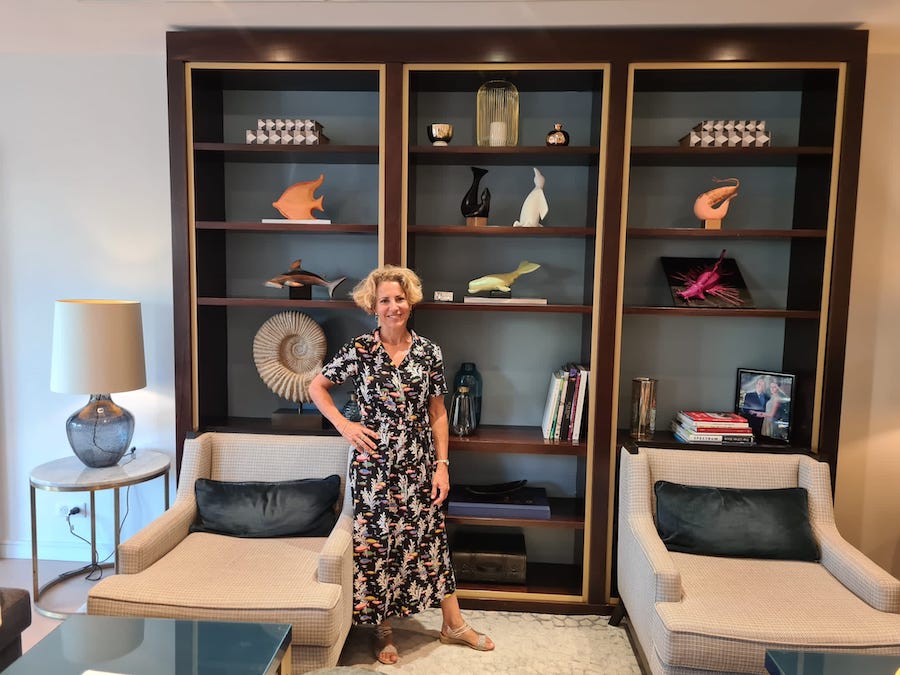 An exhibition is being held at the Columbus Hotel featuring works by artist Ti’Ou whose passion for scuba diving and the sea has inspired her bold collection of water dwelling creatures.

“Artist by nature” Ti’Ou grew up in Nice as an avid scuba diver with a particular affection for the Mediterranean. This infatuation with the sea inspired her as she grew up and became an artist by trade, creating wondrous sculptures made from clay and metal.

Now she is exhibiting her works at the Columbus Hotel so that others may enjoy her beautifully fluid sculptures of marine animals and life. The show, called 7 Marine Beauties, will be on display until 31st August.

She explains the thought that goes into making her pieces, saying, “I work in various media, particularly clay to draw in volume the clean lines of sublimated marine animals, with offbeat hues, luminous and shimmering as under the sun piercing the sea with its rays.”

As well as being an artist, Ti’Ou is the founder of an association that promotes environmental education called Terre de Vrai. The organisation aims to raise awareness of marine biodiversity by showcasing its beauty and inspire people to take steps to preserve it.

The show is very much in line with the Monegasque ethos, which has long championed ocean protection measures and has taken many steps over the years in this direction.

Some of her works include a sleek black sea lion playfully angled on its back, a large, detailed crevette, with delicate whiskers, a hammerhead shark in clay, iron and acrylic coloured with bronze oxide giving it an extraordinary hue, and a majestic Beluga whale, cleanly lined all in white.

All her works can be taken home by collectors looking for pieces which are at once lovely to look at and helping ocean conservation.

#8MarsMonaco to honour heroines of Covid

Local News Cassandra Tanti - February 8, 2021
The Principality will mark International Women's Rights Day this year by honouring the females who have been working at the frontline of Monaco’s fight against Covid-19.

Local News Luke Entwistle - April 6, 2022
It is the final chance for visitors of the exhibition, which is located in the Salle d’Exhibition du Quai Antoine 1er, to delve into the foundations of Monaco’s rich sporting heritage.