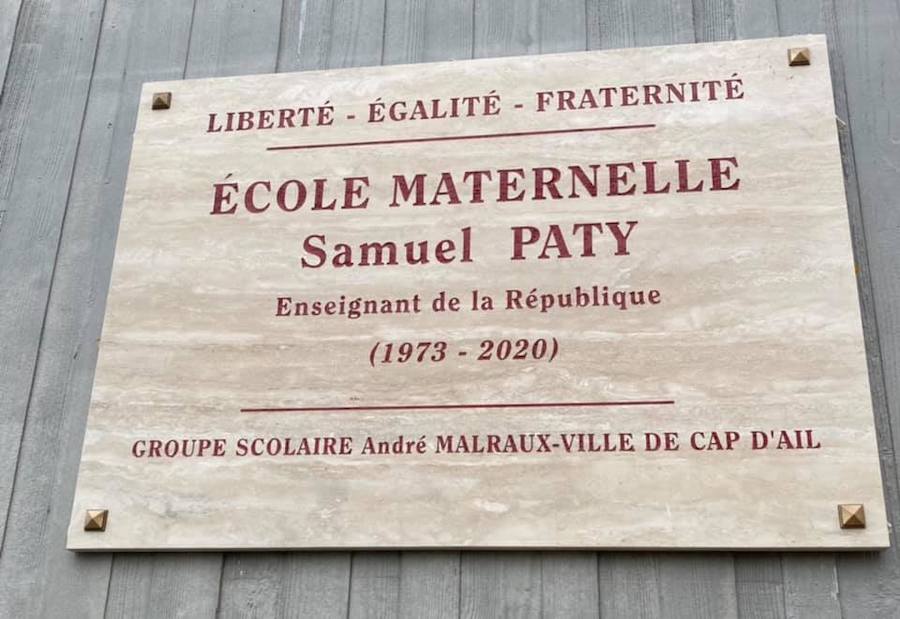 Cap d’Ail’s new nursery school has officially been named the Ecole Samuel Paty, after the schoolteacher who was assassinated near Paris by a young Muslim extremist.
It was a sober moment on Friday 16th July when the school, originally named André Malraux, was rechristened as the Ecole Samuel Paty in honour of the history and geography teacher.
On 16th October 2020, Samuel Paty was beheaded by a Muslim extremist, 18-year-old Abdoullakh Abouyedovich Anzorov, who was subsequently shot and killed by police.
Friday’s ceremony was attended by long-time Cap d’Ail Mayor Xavier Beck, who first initiated the request to rename the school, as well as by Paty’s sister Mickaelle Paty and the Paty family lawyer.
A plaque has been placed next to the motto and flag of France saying, in French, “Ecole Maternelle Samuel Paty, teacher of the Republic (1973-2020).”
Mayor Beck caused a swirl of controversy when he proposed renaming the school. After clearing the decision with Paty’s family, the municipal council eventually decided to go for the change.
“Samuel Paty was not simply a good son, a good father, a good brother, he had chosen to be a teacher, a teacher of the Republic,” said Mayor Beck during the ceremony. “A teacher that his students described as invested, loving his profession and benevolent.”
Paty’s sister Mickaelle also spoke movingly about her brother and about hope, saying, “Thank you to all the people who were opposed to this project and who finally accepted it. Thank you for debating, arguing about this choice which did not seem obvious to you, legitimate. I know that at one point in your life, you have inevitably met a parent, a friend, a teacher, someone like my brother who explained to you that in France, freedom of expression is a fundamental right.
“Continue to take sides. Samuel has disappeared but freedom of expression must be eternal. My brother liked to say: ‘I would like my life and my death to be used for something’. Thanks to all of you, his will makes perfect sense.”