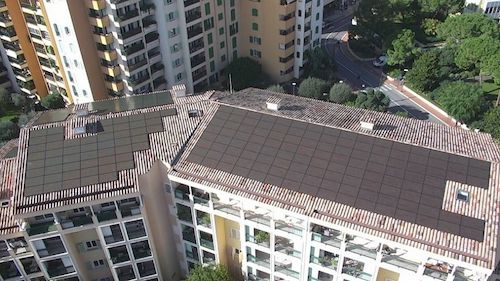 New photovoltaic panels have been installed on the roof of Monaco’s fire station in Fontvieille, making it the Principality’s largest producer of renewable energy to date in a public building.

The government’s energy transition policy is moving full steam ahead. With the fitting of solar panels in the Fontvieille station, the energy output will cover nearly 40% of the entire compound’s energy needs, including the 40 autonomous dwellings attached to it.

The photovoltaic field covers an area of 490m2 and is comprised of 299 separate panels. The annual production is approximately 113MWh (113,000KWh) and will reduce the carbon footprint of the edifice by 9.3 tonnes each year.

These panels are part of the larger scale energy transition plan, which aims to see the Principality carbon neutral by 2050.

The three pronged effort is focused mainly transport, waste and energy consumption. In the transportation sector, the idea is to reduce emissions from cars, buses and other petrol-powered vehicles by using alternative forms of transport, such as bikes, electric vehicles and walking.

The handling of waste means encouraging residents and visitors to responsibly dispose of it through recycling efforts, as well as reducing the amount of unnecessary waste in the first place.

Energy consumption is directed at both public and private buildings where compliance with strict new measures to improve energy ratings in existing edifices and in the construction of new ones using energy-saving techniques are being implemented.

Prince Albert first initiated these changes in 2016 in his ongoing work toward using environmentally sound practices in the Principality and abroad.