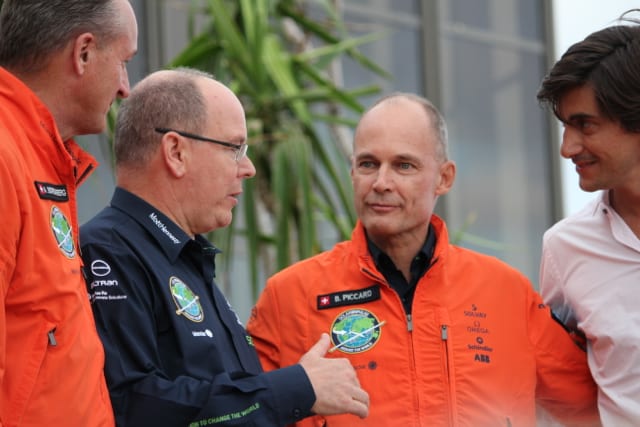 Bertrand Piccard, one of two Swiss pilots who made the first circumnavigation of the world in a solar-powered aircraft, Solar Impulse, has said he wants to meet Donald Trump after the inauguration to highlight the falling costs of renewables compared to fossil fuels.

Piccard, CEO of Solar Impulse SA, believes that investing in clean energy is key to creating jobs and growth, while Trump has criticised solar and wind energy as being too costly.

“If they want to make America great again they will need to use clean technologies and renewable energies,” Piccard said. “You will not have growth with old technologies,” he added.

“I’m also an entrepreneur like him,” Piccard said. “I flew around the world on solar power because it’s possible. I built a company, found the money and technology to do it, so I think if you speak a language of the entrepreneur, you can show him where the new business is.”

The solar-powered flight, which covered more than 40,000 km and finished July 26, 2016, had its technical control centre in Monaco.

Local News Cassandra Tanti - November 26, 2019
Princess Charlene of Monaco has shared what life is like raising her strong-willed twins in a new interview published recently. The South African born Princess also revealed that her husband, Prince Albert, is a “fun” father who personally takes his kids to school every day. [ihc-hide-content ihc_mb_type="show" ihc_mb_who="2" ihc_mb_template="1" ] In an interview with French magazine Point de Vue, Princess Charlene says that four-year-old twins Prince Jacques and Princess Gabriella share a bond of “indescribable affection and gentleness for each other”. “They talk to each other all the time, and like all children they sometimes can be a little abrupt, a little hard even in their exchanges, but they support each other unconditionally,” she adds.

Like many Monaco families, the children speak English at home and French at school. “This leads them to develop their own thinking, their own vision of things,” says Princess Charlene. “As their mother, I discover, I learn. I find it marvellous to follow their evolution, accompanying them on this path.” She describes her children as having an inner strength which allows them to say what they think and feel, “whatever the circumstances”. [caption id="attachment_33730" align="alignnone" width="900"] 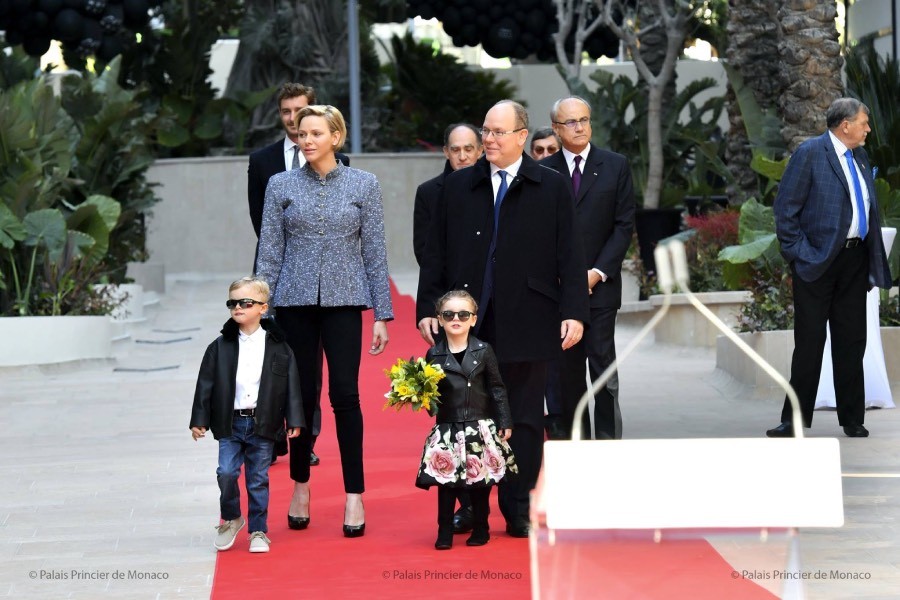 Prince Albert, Princess Charlene, Prince Jacques and Princess Gabriella at the inauguration of One Monte-Carlo in February © Photo: Manuel Vitali/ Direction de la communication et Pierre Villard/SBM[/caption] “When it doesn’t work, it doesn’t work, and we encourage them to express themselves,” reveals the Princess. “And when all is well, then nothing and no one can stop them.” Princess Charlene describes an average day in the princely family, beginning with Prince Albert taking the twins to school. “When they come back, my work begins, continuing until the next day. Evenings usually involve a lot of movement. When I’m alone with them, the kids fight over who will sleep with mum. They love to climb into our bed, and suddenly we find ourselves a little cramped. All this without counting our two dogs, Poppy and Harley!”

Princess Charlene says she is amazed at how well her children adapt to all situations and the confidence that they have in themselves. She describes herself as a very hands-on and protective mother, although she admits raising twins is very exhausting. “It is also very stimulating in many areas,” she adds. [caption id="attachment_42213" align="alignnone" width="600"] 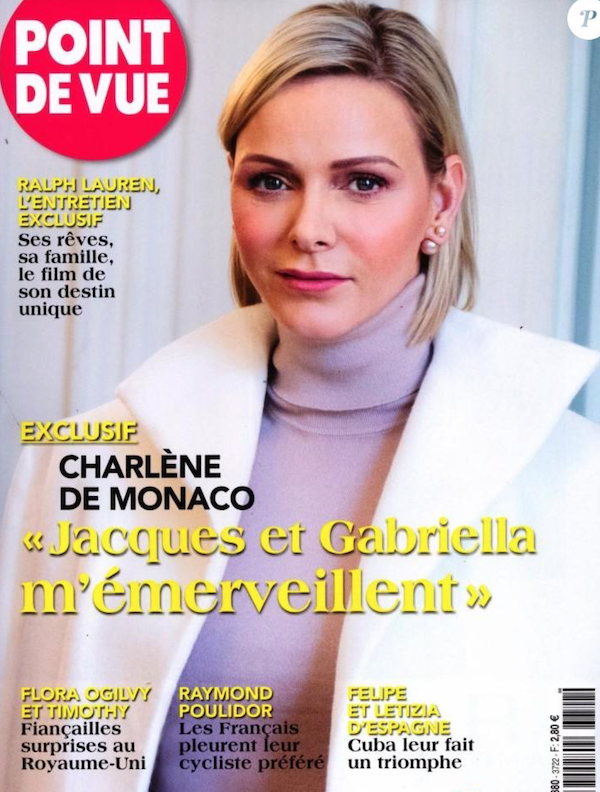 The cover of the latest edition of Point de Vue featuring Princess Charlene[/caption] Point de Vue is a weekly magazine that specialises in royal news and “exceptional people”. Throughout the years, Princess Charlene has been a strong focus of the French publication, which has covered everything from her early relationship with Prince Albert, to her pregnancy and the birth of the twins. In this interview, published the day after Monaco’s National Day celebrations, Princess Charlene spoke candidly of the official role her children are increasingly expected to fulfil. “They know that this is a particularly busy time for their parents, but I think they’re still a bit too young to fully understand the meaning,” she says. Prince Jacques melted hearts across the globe on 19th November when he was presented wearing full military uniform for the first time, with a traditional red, white and blue helmet to complete the look. [caption id="attachment_42055" align="alignnone" width="490"] 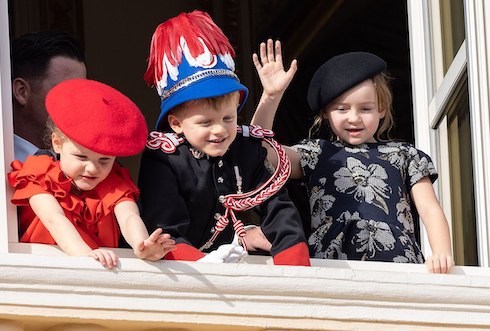 Photo: Prince's Palace[/caption] The princess also gave readers an insight into life at the palace, describing her husband Prince Albert as “a remarkable, wonderful, fun father; a dad who listens and encourages his children. He spends a lot of time with Jacques and Gabriella and takes care of them as often as he can.” While the couple often spend time apart because of their busy schedules, the children, she says, almost always accompany at least one parent on their travels. “They’re being raised everywhere,” she reveals, “but when we’re just four, it doesn’t matter where we are: that place is our home.” [caption id="attachment_41301" align="alignnone" width="500"] 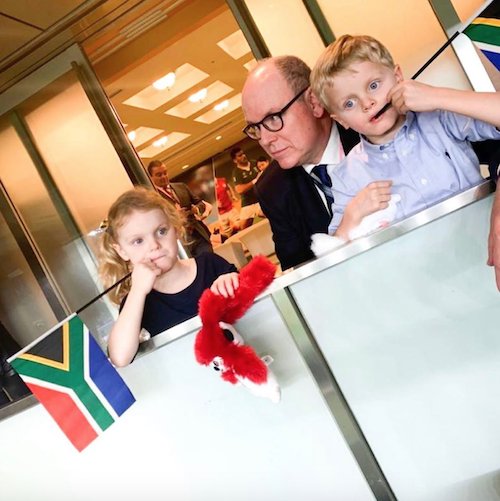 Prince Albert, Prince Jacques and Princess Gabriella cheering South Africa to victory for the Rugby World Cup in October. Picture: Photo: HSHPrincessCharlene/Instagram[/caption] As a former Olympic swimmer, Princess Charlene encourages her children to do as many sports as possible. Not surprisingly, they learnt to swim from a very early age. “We will see, in the next two or three years, how this taste evolves, and which disciplines will have their preference.” The Princess reflects on the time that she spent with her children in South Africa earlier this year, saying, “I’d dreamed of taking them there for a long time, showing them South Africa, certainly, but also Benoni, the city where I grew up… When we arrived, we were all looking through the porthole and Jacques cried ‘Wow, this is the country where you come from, mummy? It’s so big!’ It was very moving for me.” Jacques and Gabriella had the opportunity to visit her nephew in school in Benoni, where they “were able to play with their cousins’ classmates, and there was absolutely no barrier between them,” she reveals. “I saw my children confident, happy, and it gave me immense happiness. Then Albert and I took them into the bush to see animals in the wild. The twins were able to see a rhinoceros for the first time.” “These,” she says, “were moments that will remain within me forever.”   Top photo: National Day 2019, photo Prince's Palace of Monaco [/ihc-hide-content]

Photo: AeroMobil[/caption] AeroMobil, an advanced engineering company that is commercialising a sophisticated flying supercar, will be launching its new model of the AeroMobil Flying Car at Top Marques Monaco on Thursday, April 20. The flying car was designed by Štefan Klein and was first flown in 2013. The AeroMobil is a completely integrated aircraft as well as a fully functioning four-wheeled car, powered by hybrid propulsion. By combining aero and car functionality in perfect harmony it heralds a new era in efficient and exciting travel, offering users an unparalleled choice of transport on the road or in the air, its makers say. The new model of AeroMobil will be the company’s first commercially available vehicle featuring hundreds of improvements, both in design and in engineering, compared to the prototype unveiled two and half years ago in Vienna, Austria. The team behind the newest AeroMobil, led by Juraj Vaculik, CEO and Douglas MacAndrew, CTO, built the vehicle in compliance with the existing regulatory frameworks for both cars and airplanes. The Bratislava, Slovakia, based company will be exhibiting at Top Marques Monaco, looking for its first potential customers and also future investors. Top Marques Monaco, the world’s most exclusive supercar show, opens on April 20 and runs until April 23.