Solidarity the theme at Francophonie conference

Solidarity the theme at Francophonie conference 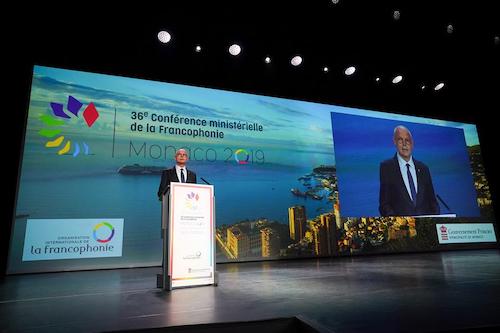 The 36th Conference of Francophone countries opened on Wednesday at the Grimaldi Forum with a video message delivered by Prince Albert II and delegates from 88 French-speaking nations and governments in attendance.

“The holding of this meeting in Monaco is for us a happy moment,” said Monaco’s Minister of State, Serge Telle, in his opening speech. “This is due to the importance we attach to the International Organisation of La Francophonie, which the Principality of Monaco is honoured to have been one of the founders, and of which she is today an active member and a faithful supporter.”

The conference, whose main aim is to unify the world’s French speaking countries and their governments, encourages multiculturalism, economic solidarity, and political confederacy.

The theme of this year’s gathering, ‘Reconciling humanity and the planet’, is one dear to the Prince and the Principality’s general philosophy.

“To save our planet, all the energies, all the wills, all the means must be combined, can be combined. Those of the states and governments we represent here, of course. But also those of civil societies and their youth in particular, those of companies, those of NGOs, intellectuals, artists, scientists – in fact, those of each of us,” said Mr Telle. “If we want to act effectively at the service of our planet, we must do it together. This is the meaning of the event we are organising on the sidelines of this conference, on sustainable tourism.”