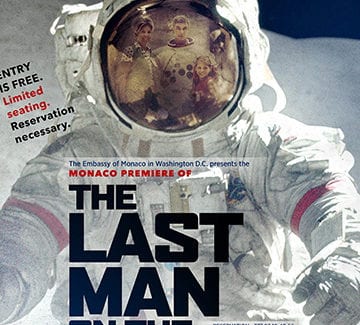 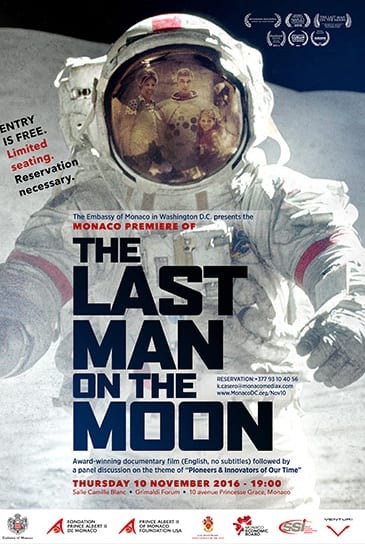 Monaco will premiere the award-winning documentary film, The Last Man on the Moon, in English, at the Grimaldi Forum on Thursday, November 10.

A panel, with some of today’s eminent leaders in air and space travel and technology, will be held at 5:30 pm, before the 7 pm screening, which is free and open to the public.

Held under the patronage of HSH Prince Albert II, this is an initiative of the Embassy of Monaco in Washington, DC, to show the film based on a story by Eugene Cernan about his two extraordinary missions to the moon and what he loved and lost in the process.

The screening will follow a 30-40 minute discussion on the theme of Pioneers and Innovators of Our Time (also in English) on air and space exploration that has changed and inspired the world, emphasising the importance of clean technology for the future.

“I am truly honoured that The Last Man on the Moon is to be screened in such esteemed company in Monaco. It’s been a long, memorable journey since the dream of making the film first took hold of me after reading Gene Cernan’s book. He was one of the great pioneering space explorers of his time, and I greatly look forward to being part of a panel that includes people who are shaping the course of space travel in the future,” said Mark Craig, the film’s director and co-producer, who also wrote the screenplay.

“Space exploration and the future of renewable energy technologies are both of the utmost importance for our planet and the survival of humankind. Monaco is proud to be at the forefront of these discussions and to bring together such distinguished leaders and pioneers from different parts of the globe to share in these important topics, and the Monaco premiere of The Last Man on the Moon provides us with the perfect launch pad,” said Her Excellency Maguy Maccario Doyle, the Principality’s Ambassador to the US and the event’s convener.

Tickets are free but limited seating is available. Send your request by November 4 to k.casero@monacomediax.com

Local News Staff Writer - August 29, 2017
Saturday 7 October at 20:00, Monte-Carlo Opera - Salle Garnier: As part of the celebration of the 150th Canada in Monaco Anniversary, Gala concert for Canadian Thanksgiving given by young Canadian talents in the world of Classical music, including members of the Monte-Carlo Philharmonic Orchestra. For information, call: + 377 93 50 45 82

Local News Stephanie Horsman - February 4, 2021
The Principality is taking its commitment to the environment one step further with the introduction of a fleet of 100% electric rubbish collection trucks.