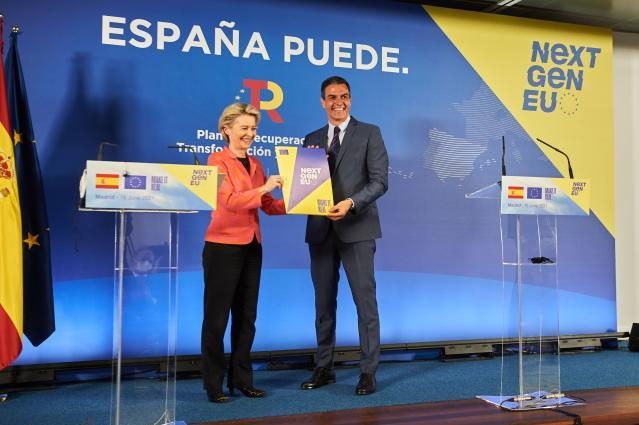 Spain is among the first countries to receive its share of a €723.8 billion pandemic recovery fund, taking control of €9 billion in pre-financing.

Like all Member States receiving the first tranche of money, the funding issued by the European Commission is equivalent to 13% of the country’s financial allocation under the Recovery and Resilience Facility (RRF). The pre-financing payment will help to kick-start the implementation of the investment and reform measures outlined in Spain’s recovery and resilience plan.

In all, the country is set to receive €69.5 billion over the lifetime of its plan.

“Today’s disbursement is a decisive moment for Spain and its people, kicking off the implementation of the recovery and resilience plan,” President Ursula von der Leyen said. “This plan was ‘made in Spain’ to emerge stronger from the crisis and invest in a sustainable and more digital recovery. I am convinced that Spain’s ambitious plan will provide a crucial push for the European Green Deal to become a reality, it will further digitalise the economy and it will make Spain more resilient than ever. We stand ready to support you in each step of the way.”

The money will finance, in part, an ambitious law on climate change and energy transition, enshrining the renewable targets for 2030 and climate neutrality by 2050, including a 100% renewable electricity system. The plan will also support innovative renewable energy sources with €3.9 billion and includes €3.4 billion to support more than half a million energy efficiency renovations in residential buildings.

Meanwhile, €2.4 billion will be invested in reducing the use of temporary contracts in the labour market, improving individual support to jobseekers, as well as training opportunities and better hiring incentives. Nearly €2.8 billion will be invested in reducing youth unemployment and improving vocational training by creating at least 135,000 new places in vocational education. Additional measures will strengthen the effectiveness of public policies and modernise the tax system.