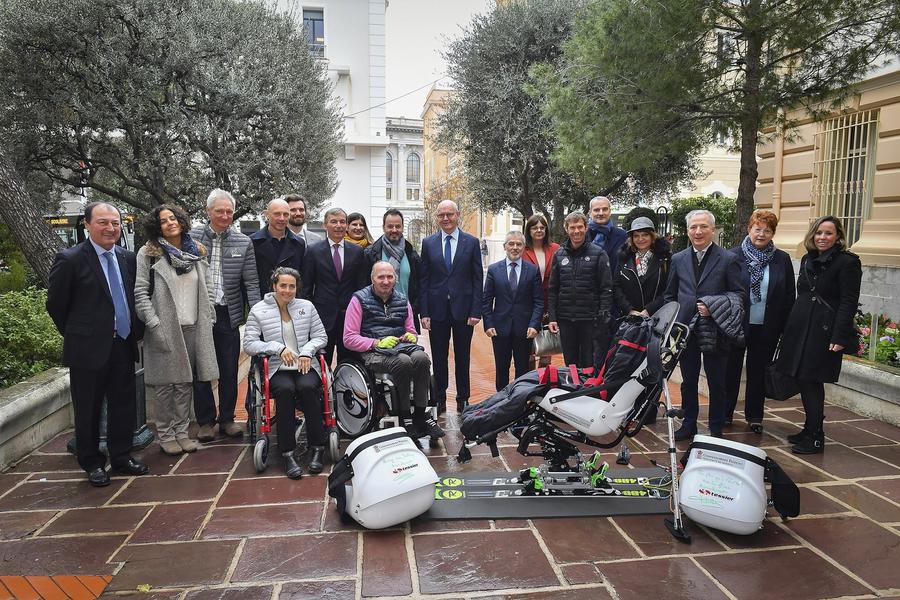 With just over a year before the Special Olympics Winter Games in Sweden next February, the Monegasque Special Olympics team is gearing up, but not before they face a heavy schedule of big competitions in the coming months.
Founded in 1980 and chaired first by HSH Prince Albert II, and now by former Olympian Princess Charlene, the Monegasque Special Olympics has been dedicated from the outset to giving disabled athletes a chance to shine on the international stage.
Of the 95 local athletes currently training with Special Olympics, several have reached the pinnacle of being named world champions, including 2018 tennis players Jody Onnis, Steve Demaria and Christophe Mateu. Additionally, at the Abu Dhabi World Championships last March, an impressive 33 competitors brought home medals.
President Pierre Van Klaveren emphasises the values of sportsmanship and discipline that high-level athletes must maintain in order to be considered for the team. This has paid off, as the Monaco association has not only consistently brought home medals but are invited to the biggest events year after year to compete at the highest levels.
The schedule for the winter sport teams this year is gruelling. Next month, for example, the Sweden Pre-Winter Games are being held, giving skiers and snowshoers a chance to practice on the courses they will be competing for in earnest next year. Before this though, they will be participating in the Swiss national ski championships at the end of January and the VII Nations of Isola 2000 in March.
For non-winter sport athletes, this year will see competitors at the swimming sprint championships in March and April, the No Limits Converciano football tournament in Florence in April, and the unified tennis world championship in Budapest in May and the French national pétanque games in Cambray in June.
To ensure the proper training and safety of the adults and children participating, additional coaches have been brought on, thus expanding the programme and the number of competitions that can be attended.
The government of Monaco has long been not just fans of the athletes, but major financial supporters, allowing these athletes access to the best training and the most competitions possible.
To emphasise their commitment to athletes with special needs, the Department of Social Affairs and Health has just bought and made available to the Monegasque Ski Federation a tandem ski, suitable for persons of limited mobility or physical disability which normally disallows them to enjoy the fresh air, camaraderie and excitement skiing affords.
Didier Gamerdinger, Minister of Social Affairs and Health, who presented the new ski said: “the Government wished to give the Monegasque Ski Federation the means to acquire a tandem ski so that people with disabilities or reduced mobility can slide safely on the slopes. They will be able to discover sensations, enjoy the surrounding panoramas and experience winter sports in their own way.”
Trained supervisors will accompany the intrepid skiers and special four-seater detachable  lifts and wide, gentle slopes are at their disposal at ski areas in the PACA region.