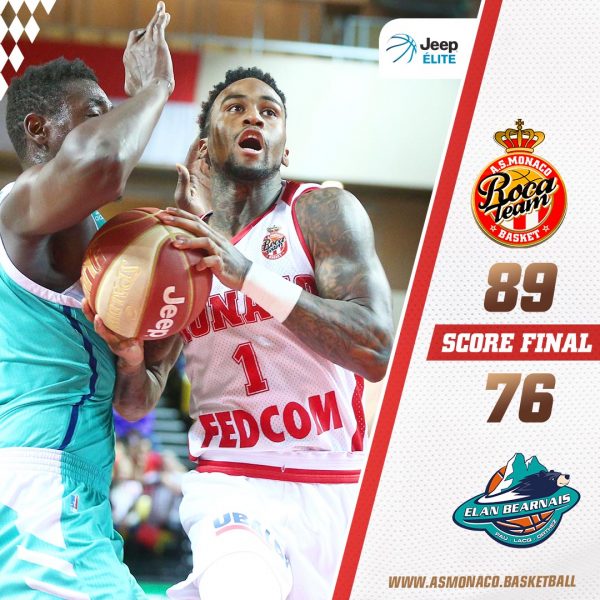 Fans of AS Monaco basketball got what they paid for on Saturday night with a solid win against Pau-Orthez on their home turf at Gaston Médecin.
AS Monaco Basketball celebrated their 26th straight home win of Jeep Elite action over the weekend with an 89-76 win over tough Élan-Béarnais Pau-Lacq-Orthez.
The game started out less than auspiciously, as is often the case with two evenly matched teams, with only two points made by either side in the first five minutes of play. Then things exploded with Captain Dee Bost putting away two three-pointers and Eric Buckner everywhere. By the 12th minute, Roca Team had nearly double the points of their opponents, but Élan-Béarnais wasn’t going down without a fight.
After a series of spectacular shots, they came back just minutes later to even up the score. The entire first half played out this way, with Monaco taking the lead only to have Pau claw their way back. By the halftime buzzer, Monaco held onto a slim eight point lead, going into the locker rooms with a 44-36 score.
When play resumed, the Roca Team were decidedly on fire. Three-pointers by Yak Outtara and Dee Bost out of the gate set the tone, and aggressive offense kept the momentum going with big shots made by Norris Cole and another three-pointer by Kim Tillie and an end-of-game ringer by Vincent Vermillac.
Coach Obradovic gave his usual subdued credit where it was due, saying, “After a big victory in Russia and a long trip, the guys had the right attitude. It was a good job.”
Team Captain Dee Bost was a bit more effusive in his praise. “The ball was circulating well in our team. At home, the fans give us strength. We are ready for the big trip to Vilnius”, he said after the game.
Roca Team’s next two games are away. The first is on 22nd January against Vilnius in the Euro Cup and the next is on the 25th for a Jeep Elite match against the Boulogne-Levallois Metropolitans.