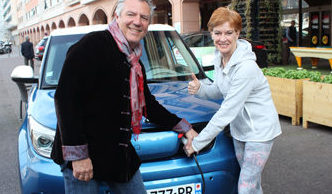 Stars’n’Bars co-founders Didier Rubiolo and Kate Powers continued to highlight their commitment to the environment and the planet Wednesday afternoon, as they jumped into the restaurant’s new electric car, the Kia Soul EV.

The Soul is the latest addition to Stars’n’Bars’ “eco-fleet” – which consists of a battery-powered, 2-seater Twizy and two electric bicycles.

Speaking outside the restaurant in front of the Soul, Mr Rubiolo told Monaco Life: “About a year and a half ago, we developed an international business model to associate the restaurant with different local businesses, as we realised this was a win-win situation, not only for Stars’n’Bars.”

For Didier and Kate, this evolution included the launching of the community-based Eco-Hub and raising awareness for all things that touch the environment, as well as a partnership with EVER Salon, the International Conference and Exhibition of Ecological Vehicles and Renewable Energies, which takes place at the Grimaldi Forum. For the first time, Stars’n’Bars will have a stand at the event, which this year runs from April 11 to 13.

“EVER is the perfect platform for us to promote customer knowledge,” Mr Rubiolo explained. “People can visit our stand and discover the organic menus we serve our clients, as well as hear about the Eco-Hub’s well-being workshops and conferences about the environment that we organise. They can also learn about Monacology.”

With the aim to help promote the use of energy efficient transport in the Principality, Stars’n’Bars’ Soul EV initiative is in partnership with Cavallari Motors and Kia Motors France, the second largest automobile manufacturer in South Korea and the creator of the Soul, the first urban Crossover 100% electric car sold worldwide.

A representative from Kia told Monaco Life, “This partnership allows us to draw attention to this rare technology with incredible visibility and, especially, with a well known figure in Monaco.”

For the third year running, Kia Motors France and Cavallari Motors are the Official Partner of EVER Monaco 2017. Visitors at the salon will be able to test drive the Kia Soul EV, the market’s first 100% electric crossover, which is meeting increasing success in France, ranking 6th among the best-selling electric vehicles in 2015 in metropolitan France.

Monacology welcomes over 1000 school children each June to its weeklong Eco Village on the port.

“Protection of the Mediterranean”: free conference Sunday at Stars”n’Bars 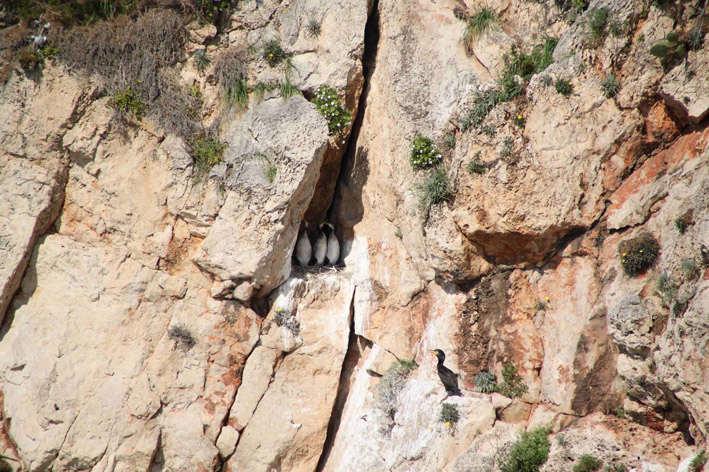 Photo: Communications Department[/caption] The Environment Directorate just announced the recent birth of six crested cormorants on the Rocher. These rare birds – emblematic of the Mediterranean – nested successfully in the Principality in 2015, although the number of offspring in that year remains unknown. The nesting of the species in this sector of the Mediterranean littoral is a first, and there have been a total of eight births on the cliffs this year. The only known colony of Phalacrocorax aristoletis desmarestii in continental France is in the Bouches-du-Rhône and a nesting couple has been recorded in the Var only since 2006. Also noted on the Rock, so far this year a pair of peregrine falcons, a grey heron and a kestrel.