Stars’n’Bars has won the Energy Globe Award for its 2019 social media campaign to reduce ocean pollution created by discarded cigarette butts.
“Each year, billions of cigarette butts are thoughtlessly thrown on the ground or dropped into sewer grates and end up in the sea,” said Kate Powers, co-founder of Stars’n’Bars. “A cigarette contains more than 4,000 pollutants and once at sea, it takes 15 years to decompose. One cigarette butt can pollute up to 500 litres of water.”
Inspired by actions in other counties, Stars’n’Bars last year initiated a public awareness campaign on its social media, offering a free glass of beer or soda in exchange for a container filled with cigarette butts collected from the local port area by customers.
“The response was immediate. Both adults and children arrived at the restaurant with bottles and glasses filled with cigarette butts,” revealed Ms Powers. “In just one month, 2,354 cigarette butts were collected, saving up to 1,177,000 litres of water.” 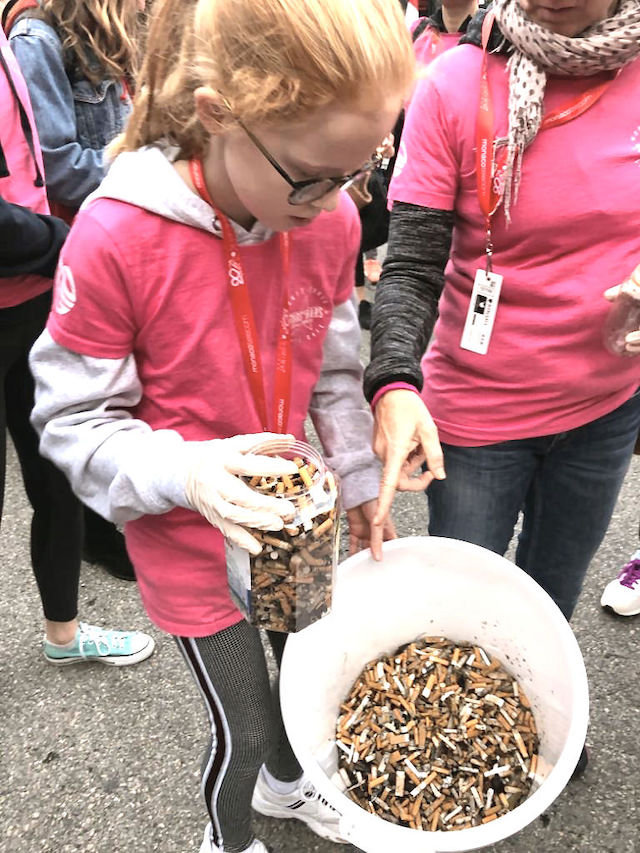 Postings on the Stars’n’Bars Facebook page promoting the campaign were shared more than 1,300 times in less than two days, while local media – including Monaco Life – also gave the campaign plenty of traction.
“Our goal, however, was to reduce or eliminate waste rather than just dispose of it. Thankfully, we were able to pass on the many kilos of cigarette butts to Eco Megot in southwest France,” said Ms Powers.
The innovative group is engaged not only in collecting cigarette butts but also conducting research to develop a technique to recycle the three waste streams of a cigarette: tobacco, paper and filter. The butts collected are used in their laboratories to find a permanent solution to this global problem.
“We are honoured to receive the Energy Globe Award and congratulate all those who find creative solutions to reducing the impact of waste on our community and our planet,” said Ms Powers.
The objective of the Energy Globe Awards is to raise awareness in society of the need for ecological change by rewarding the best sustainable development projects. More than 182 countries participate and over 2,000 projects are submitted each year on subjects such as the conservation of resources and the use of renewable or emission-free energy sources.
The award was created more than 20 years ago by the Energy Globe Foundation, whose partners include United Nations Industrial Development Organisation (UNIDO) and the international offices of the Austrian Chamber of Commerce.
Stars’n’Bars continues to raise public awareness about the dangers of cigarette waste with messages posted both inside and outside the restaurant.
“We urge our customers and passersby to ‘think before you flick’. We also organise regular port clean ups after major events such as the Grand Prix and the Monaco Yacht Show, calling on volunteers to become Stars’n’Bars ‘EcoAngels’.”
During World Clean Up Day in 2019, they were even joined by Monaco’s Prince Albert II – a world leader in protecting the environment.