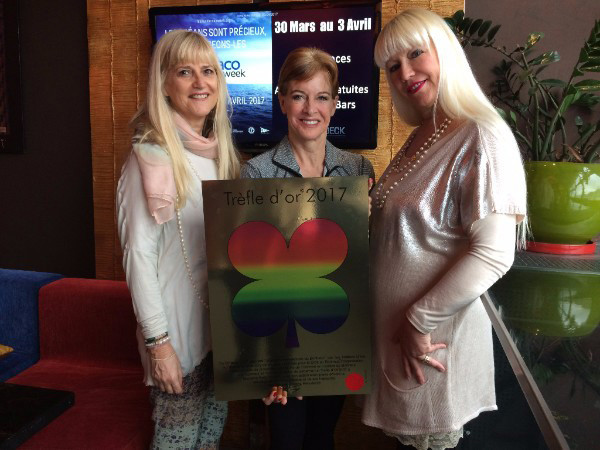 Murielle Van Boxem, President and Founder of the World League for the Right to Happiness, presented Kate Powers the Golden Clover 2017 on the occasion of Chinese Medicine Welfare Day at Stars’n’Bars.

The award was given for Ms Powers unstinting efforts to help safeguard our planet via Monacology, the Monaco Association that aims to sensitise young people to the environment, and its new EcoHub, which organises at least one free event per month based on the well-being of the planet.

The League also awarded the Golden Clovers of Happiness 2017 to Joseph E. Stiglitz, the Nobel Prize Winner in Economics, for having demonstrated the importance of happiness in the economy, and for his books and lectures on the subject; Luc Ferry for his book “Seven ways to be happy or the paradoxes of happiness;” Valérie Lorenz-Poinsot author of “Wonder women say yes to your powers” and the Blog Generation Guinea Pigs for its survey of 54,000 young people “Are young people happy in France?”

The World League for the Right to Happiness, free of any confessional or political affiliation, has among its honorary members Matthieu Ricard, John Martinotti, Ouhoud al-Roumi, Joel Blanc, Stéphane Valery Franck Nicolas and Dr Massobrio-Macchi.

Get a move on Sunday at Stars’n’Bars

Business & Finance Cassandra Tanti - August 31, 2020
Serge Telle has been awarded Commander of the Order of Grimaldi as his position as Minister of State of the Principality officially ends this week.

Local News Stephanie Horsman - June 5, 2019
Spring is in full bloom and it is on display at the second annual Rendez-vous aux jardins.