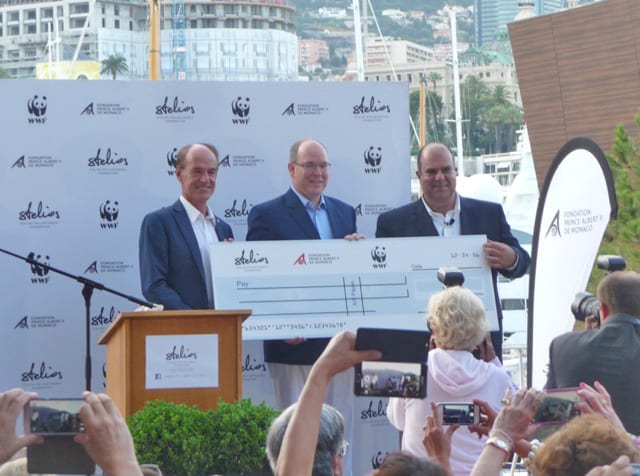 The highly spirited fundraiser, one of the season’s not-to-be missed events judging by the dense and decked out crowd, was in support of the Prince Albert II of Monaco Foundation and the WWF to safeguard the Pelagos Sanctuary, ensuring efficient management of the Mediterranean’s “first transboundary area” and conserving its marine biodiversity.

Sir Stelios told Monaco Life early on in the evening: “WWF is a charity that I’ve worked with for more than twenty years. I started from the shipping business and then with creating the airline, I thought we should do something to give something back to the environment.” And when asked how does he choose who to invite? “It’s a good guest list but people are coming to make a difference.”

In his opening remarks, the easyJet founder sent out a challenge. “This is the ultimate selfie heaven,” he said to a cheering audience. “The person that posts the most selfies tonight on our Facebook group will win a bottle of champagne from me.”

Prince Albert thanked Sir Stelios for hosting the event and Marco Lambertini for his extremely valuable partnership.  “This evening is quite special for me, as my foundation is celebrating a ten year milestone,” the sovereign commented. “One of our main regions of focus is the Mediterranean and Pelagos is a sanctuary very dear to my heart because my father helped the establishment at Pelagos many years ago.

Adding that the sanctuary needs a new impetus, he added, “The original agreement between France, Italy and Monaco and its management is currently under reassessment and we hope to more proactive in that.”

The charity event included a silent auction, curated by Space SBH around a ‘Small is Beautiful’ theme, of 32 works of art and jewellery. All donations made by guests, from the €50 drinks at the Honesty Bar to “Adopt a Dolphin” for €1000, were doubled by the Stelios Philanthropic Foundation. The event raised €192,000, €2,000 more than last year.

The Pelgagos Sanctuary covers over 87,500sqm of the sea – 4% of the entire basin, making it the Med’s most extensive area protecting marine mammals – between southeastern France, Monaco, north-western Italy and northern Sardinia, and encompassing Corsica and the Tuscan Archipelago, and is home to the fin whale, the sperm whale and dolphins.

Culture Cassandra Tanti - July 27, 2021
The City of Nice has been added to the UN’s prestigious World Heritage List under the label of ‘Winter Resort Town of the Riviera’.

Culture Cassandra Tanti - December 18, 2020
Monaco Life goes behind the scenes of the Monte-Carlo Gala for Planetary Health to discover what it takes to put together the largest, most spectacular fundraising event in the Principality.