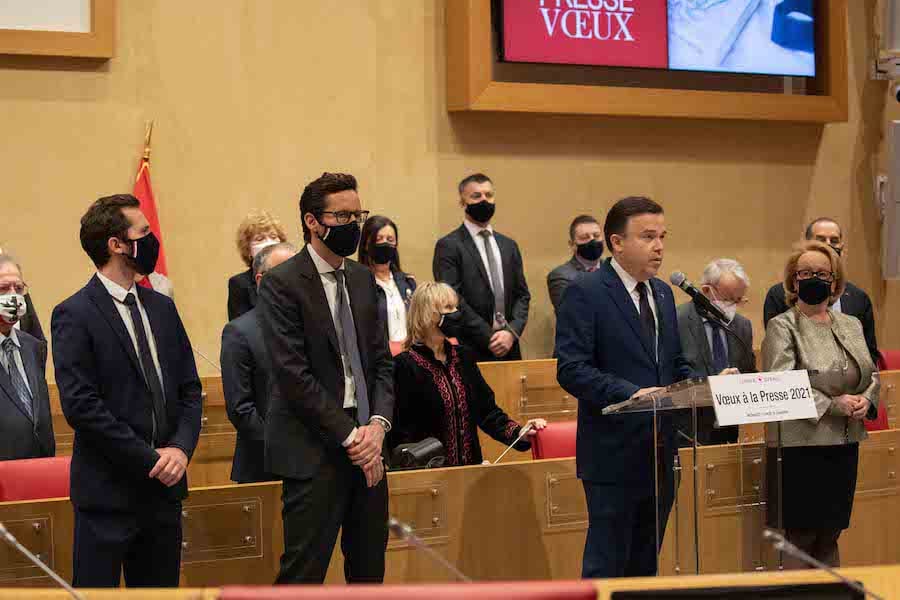 National Council President Stéphane Valeri is calling on all residents and workers in Monaco to be vaccinated against Covid as soon as possible, to put a “definitive end to this terrible pandemic and its disastrous health and economic consequences.”
Mr Valeri made the plea during the traditional new year greeting to the press on Monday 18th January. He started by wishing everyone present “a better year than 2020”.
“This year has been particularly difficult and marked by a historic global crisis which has not spared the Principality. With 2021, of course not everything will fade away like with a wave of a magic wand. As we can see, the situation remains complicated but the prospects for an end to the crisis in the coming months seem to be clearer, in particular with the mass vaccination of populations.”
Mr Valeri highlighted the important role that the National Council has played throughout the crisis, both within the framework of the Joint Covid-19 Monitoring Committee and in the legislative work of the Assembly.
“After 24 meetings of the Joint Covid-19 Monitoring Committee, set up at the end of March by the Sovereign Prince, the last of which was held on Friday, I dare say that our country is doing much better than many others,” he told the press. “We have been an institutional resource to help the Government bring its decisions closer to the immediate needs of the people of our country. This was the case for the masks, for the testing policy, and it is now the case for the deployment of vaccines.”
Mr Valeri also pointed to the National Council’s role in securing financial support for employees and business owners in the Principality, and the vital role that the media has played in relaying clear and regular information to the population during the pandemic.


But he called on the government to introduce a more effective model of communication, which includes important figures that impact decisions made in the Principality, namely the number of occupied Covid ICU beds compared to the total capacity, the incidence rate, the rate of spread of the virus, and the evolution of the number of people vaccinated.
Stéphane Valeri said that he would like to see the timely vaccination of all Monegasques and residents who wish to receive the jab, followed by all employees who travel to the Principality.
“It is therefore a question of being able to meet the needs of a potential total population of around 80,000 people to be vaccinated as soon as possible. I say potential, because obviously vaccination should only be done on a voluntary basis,” said the National Council president. “However, I call on each and every one to be vaccinated, when the moment comes for their priority group, not only to protect themselves but also to protect others and achieve collective immunity as soon as possible. This is the only way to put a definitive end to this terrible pandemic and its disastrous health and economic consequences.”
The council has asked the government to increase Monaco’s vaccination capacities and to reduce delays to a minimum.
With regards to the economy, Mr Valeri said: “We are pleased to keep the CTTR (temporary unemployment) as long as necessary, in order to safeguard as many jobs as possible.”
He acknowledged that the prolonged consequences of the pandemic continue to worsen the situation for a large number of companies, particularly those in the tourism and events sectors. As a result, the National Council is proposing that the government boost the capacity of CARE to help more structures and in greater proportions, to postpone the repayment of loans guaranteed by the State (PGE) until 2022, and to reveal each month the investments of various stimulus funds.
Finally, Mr Valeri said the Assembly will be looking at a number of legislative texts in 2021, including gaining Monegasque nationality by marriage.
“We will also vote, by amending, the bill recognising the country’s children,” concluded Mr Valeri, before wishing the press health, happiness and success for the new year.

Top photo: Stéphane Valeri and councillors, by the National Council of Monaco