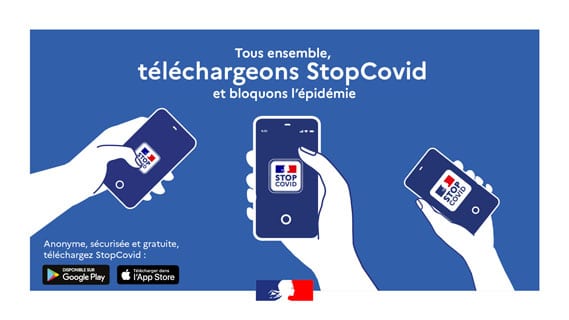 The French app, which is separate from the contact-tracing app jointly put out by Apple and Google, was designed by a group of researchers and private companies specifically for France, and in record time. Most apps of this kind take up to two years to launch.

Like most other contact-tracing apps, StopCovid uses bluetooth to create a full listing of other app users who a person has been in contact with for more than just a passing moment. It does this by assigning all users a permanent ID and sending a list of ephemeral IDs derived from the permanent ID to the user’s phone.

This is where the StopCovid app differs from others. If a person using the app is diagnosed with coronavirus, a doctor, hospital or testing centre will give them a QR code or string of letters and numbers. This allows the user to enter the code in order to alert the people the infected person has interacted with over the past two weeks.

The server gathers all the ephemeral IDs of those who had been in recent contact with the infected person and assesses them with a risk score. Anyone above a certain threshold is sent a notification recommending testing.

CNIL, France’s data-protection watchdog, has approved the app in terms of compliance with privacy regulations, and it was passed by parliament last week, though not without a few hiccoughs.

It was announced that people who choose to use or not use the app with be neither penalised nor rewarded, though wide usage would be the most effective way to track the disease.