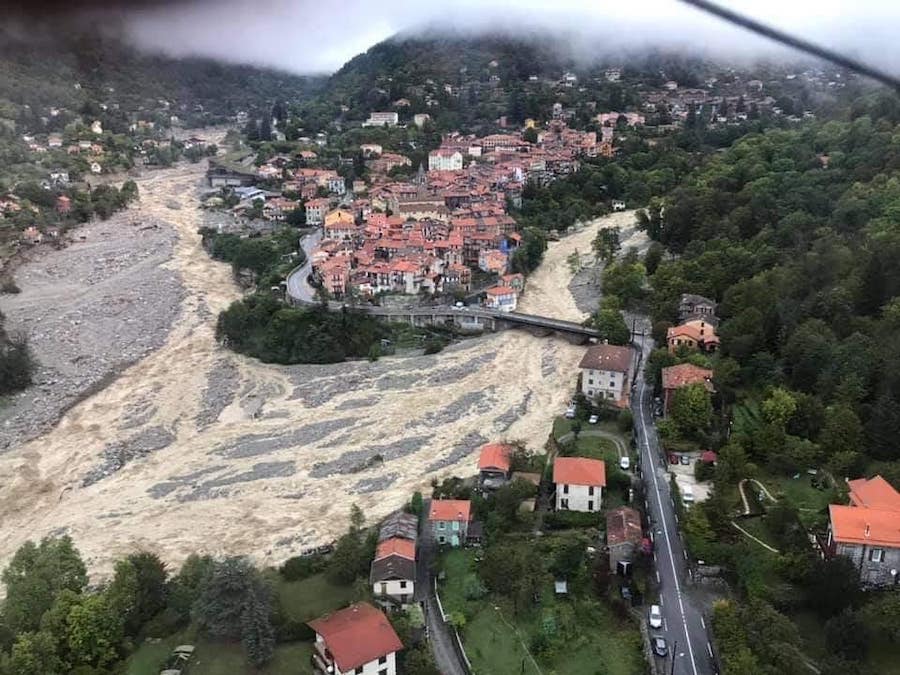 The death toll continues to rise in France and Italy following Friday’s devastating storm. Meanwhile, Monaco is doing all it can to help its neighbours.
As of Monday afternoon, the death toll stood at seven. The first body was recovered on Sunday in a submerged car in Saint-Martin-Vesubie, while two bodies were discovered by the rivers’ edge on Monday in Colomars and Lantosque.
According to Italian media reports, at least four bodies have been found on the coast of Liguria. Italian and French teams were working together to try to identify them.
In the Alpes-Maritimes, eight people who were visibly washed away in the storm are still being sought by emergency services, as well as 13 others who are presumed missing and are yet to make contact with loved ones.
Storms, torrential rain and flash floods battered the region on Friday, washing away roads and houses, cutting off entire villages and triggering landslips.
In Breil-sur-Roya, a French village close to the Italian border, houses were buried in mud and turned-over cars were stuck in the riverbed.
Rescue efforts were concentrated on the Roya valley where roughly 1,000 firefighters, backed by helicopters and the army, resumed their search for survivors and helped people whose homes were destroyed or inaccessible.
By Monday afternoon, emergency services in the Alpes-Maritimes had managed to rescue some 560 habitants, while 150 are still waiting to be evacuated.
“What we are going through is extraordinary,” said Bernard Gonzalez, prefect of the Alpes-Maritimes region, after as much as 60 centimetres of rain fell in 24 hours in the worst-affected areas.
Four French military helicopters continue to deliver water, medical equipment, generators and fuel, as well as bring rescued residents to safety.
Christian Estrosi, president of the Nice Côte d’Azur Metropolis, said that water will begin to be deployed to people in the high country – 60% of whom have no access to drinking or bathing water.


Monaco’s response
Prince Albert of Monaco has written letters to French President Emmanuel Macron, the figures of the Alpes-Maritimes department and the Mayor of Ventimiglia to show them “his sympathy and support during these painful moments”.
Logistical support and manpower were offered as early as Saturday morning, and Monegasque firefighters have been on stand-by to serve as reinforcements in cleaning operations.
On Sunday, 14 tonnes of bottled water was delivered by Monaco’s Public Force to Carros and Breil.
The government said emergency aid will also be made available.
The Monaco Red Cross has now launched an appeal for financial donations to help the victims of the storm. There are four ways to donate: either by dropping off cash at the Red Cross headquarters on 27 boulevard de Suisse; writing a cheque payable to the ‘Croix-Rouge monégasque’ and specifying ‘Tempête Alex’; via the website; or by bank transfer (RIB available on the site).
The City of Beausoleil is also collecting non-perishable foodstuffs for the residents of the Roya. Items can be dropped off from Tuesday to Friday, 11am to 4pm, at 11 avenue Professeur Langevin.
The Diocèse de Monaco, in conjunction with CARF (French Riviera Community of Agglomeration), is collecting donations of non-perishable food in all churches of the Principality. Caritas and the Société de Saint Vincent de Paul are also participating.