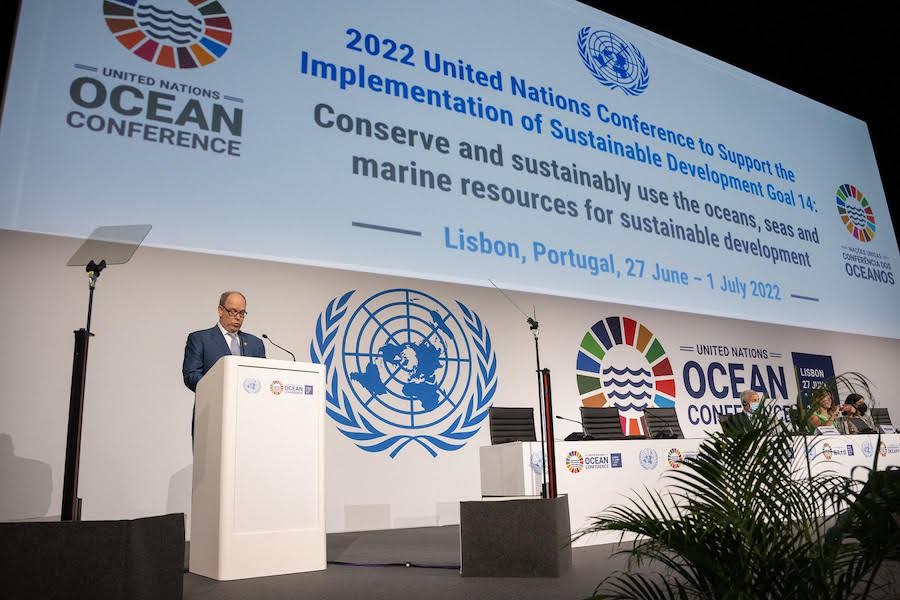 With oceans at the heart of Prince Albert’s mission in life, Monaco’s head of state led a delegation to the recent UN Conference on the Ocean. Here are the main outcomes of that important trip.

Prince Albert II led Monaco’s delegation at the 2nd United Nations Conference on the Ocean, held in Lisbon and co-hosted this year by Portugal and Kenya, on the theme ‘Oceans: scaling up action based on science and innovation for the implementation of Sustainable Development Goal number 14: assessment, partnerships and solutions’.

It was a major gathering of Heads of State and Governments, including Monaco, as well as the Secretary General of the United Nations.

The Second United Nations Conference on the Ocean, which ran from 27th June to 1st July, had many highlights, particularly from Prince Albert II, who took a very active part in the proceedings.

In his speech, the Prince encouraged nations to begin implementing concrete actions to combat the damage being inflicted upon the seas every day. He explained Monaco’s commitment on this front and the country’s active role in climate control negotiations, notably within the framework of the Intergovernmental Conference on Marine Biodiversity in Marine Zones.

The Prince also underscored the importance of putting into effect projects quickly, whatever the scale or location. In this regard, he mentioned achievements such as the Medfund, launched in 2015 in collaboration with France and Tunisia, BeMed, which supports projects to combat plastic pollution in the Mediterranean, and the Monk Seal Alliance in favour of the preservation of this Mediterranean species.

Prince Albert also took part in a discussion on the management, protection, conservation and restoration of ecosystems. He spoke on the need to identify good practices, especially local ones, and to have a global vision by comparing the expertise and approaches. His example was of marine protected areas, which Monaco has one of, and how they offer a huge variety of opportunities for collaboration.

Meanwhile, Monaco’s Minister of External Relations and Cooperation Isabelle Berro-Amadei attended various events devoted to protecting 30% of the Ocean by 2030, organised by Blue Leaders. Included in these talks were the restoration of mangroves, organised by Colombia, the acidification of the oceans, organised by the Environment Laboratories of the A.I.E.A based in Monaco, and the United Nations Decade for Ocean Sciences for Sustainable Development, organised by U.N.E.S.C.O.

Additionally, the Ambassador of Monaco to the United Nations in New York, Isabelle Picco, attended an event devoted to marine pollution by plastic waste, organised by the I.U.C.N., as well as an event organised by Portugal, France and the European Union on the promotion of negotiations on the BBNJ Agreement.

As if this weren’t enough, Monegasque institutions were also present, including the Prince Albert II of Monaco Foundation and the Oceanographic Institute-Albert I Foundation.

The conference ended with the adoption of a political declaration entitled ‘Our ocean, our future, our responsibility’, which calls on all countries to contribute to the implementation of emergency measures related to seven specific targets, including protecting 30% or more of national maritime areas by 2030, achieving carbon neutrality by 2040, reducing plastic pollution, increasing the use of renewable energies and allocating substantial funds for ocean acidification research, climate resilience projects and monitoring, control and surveillance.

Monaco helped draft this declaration and references to plastic pollution, marine scientific research, ocean acidification and threats arising from human activities, regularly defended by the Principality during negotiations, were taken addressed and incorporated.