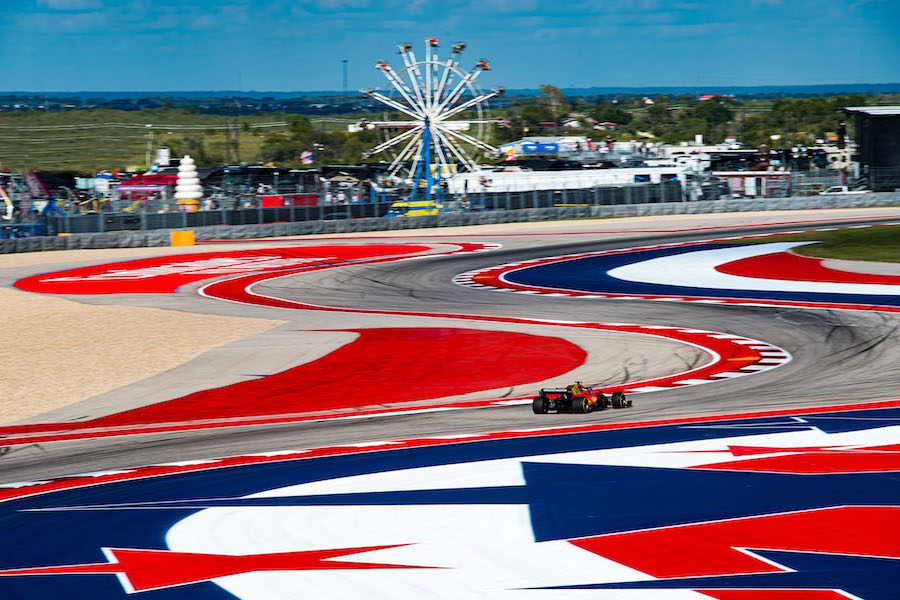 Charles Leclerc secured an impressive fourth place amidst a carnival atmosphere at the Circuit of the Americas in Austin, Texas, as Verstappen took the victory to extend his championship lead. The 140,000-strong US crowd was a welcome companion for Leclerc, who led a lonely race deprived of any on-track action.
Starting on pole, Verstappen lost the lead at the first corner despite his efforts to squeeze Hamilton, who got a blistering launch. Verstappen subsequently went wide at turn one, and would have been grateful to his team-mate Perez, who yielded in the battle for second place at turn three. Leclerc meanwhile, got off to an undramatic start as he retained his fourth place.
Further down the field, Leclerc’s team-mate Sainz came under pressure from both McLarens. Ricciardo passed Sainz with a lovely move around the outside of turn 18, but the Ferrari driver succeeded in keeping Norris behind.
Despite having overtaken Verstappen on lap one, Hamilton was unable to eke out a lead, and was quick to point out on team radio that Verstappen was in fact quicker than him.
Leclerc was understandably slower than Hamilton and the two Red Bulls, and had soon lost touch with those in front of him. His strong pace, however, saw him create a good buffer to the McLarens and his team-mate, meaning Leclerc cut a rather isolated figure on the track.
It quickly became clear that following in the dirty air would be difficult, and that the race would be won in the pit-stops rather than by on-track overtakes. In the first phase, Verstappen got the undercut on Hamilton to take a comfortable six second lead.
Verstappen’s first set of hard tyres, however, degraded quickly and he was forced in for another set of hard tyres earlier than anticipated. Meanwhile, following the pit-stops, Leclerc was quietly going about his business, and his pace in an improved Ferrari saw him out of the clutches of chasing rivals.
The tactical battle reached its crescendo in the closing stages as Verstappen’s early pit-stop meant that Hamilton was able to close-in. Hamilton got to within a second of Verstappen on the final lap, but Verstappen held onto the victory to extend his championship lead to 12 points. Perez completed the podium with Leclerc best-of-the-rest in fourth.
Post-race, Leclerc was happy both with his personal performance as well as the performance of his team. “What a race! It was definitely one of the most physical drives of my career… I really pushed the car to its limit on every lap. Our pace was a positive surprise. Although we are mostly focusing on 2022, the few upgrades we have brought this year have allowed us to make some important steps forward.”
The result sees Leclerc leapfrog Sainz into sixth in the driver standings with only five races remaining. After securing two consecutive fourth places, Leclerc will be hoping for a podium next time out in Mexico in two weeks’ time.