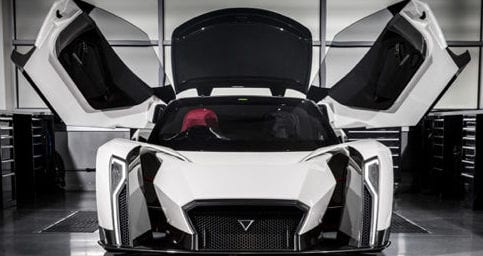 Mind-blowing technology shaping the transportation of tomorrow will be at the heart of next month’s Top Marques Monaco, the world’s most exclusive auto show.

Visitors to the 14th edition of Monaco’s Motor Show this week, from April 20 to 23, will be able to see the future first as the exhibition premieres the latest innovations on land, sea and air.

At a press conference at Stars’n’Bars on Tuesday, Manoj Bairstow, Managing Director of Top Marques, said: “For our 14th edition we have sought out the best of the best from flying cars to all-electric supercars with an excess speed of 200 mph.”

Organisers revealed that there would be a remarkable six world premieres in 2017, including AEROMOBIL’s newest model of a flying supercar, which will be unveiled at the inauguration, and so hot off the press Top Marques couldn’t include the information in the presentation, the announcement that the Jean Boulle Luxury Group will reveal at Grimaldi Forum a diamond painted Classic Bentley Azure covered with 2 million gem diamond crystals using Bouille Luxury’s proprietary diamond finish.

Additionally, four supercar world premieres are promised with the Donkervoort G8 RTO, the C10 from Calafoire, the Princess Charlotte Edition of Asfané by Frangivento and an as yet undisclosed Grand Tourer from David Brown Automotive.

PAL V Liberty, the world’s first commercial flying car with a retractable rotor, will be shown to the public for the first time, and will be for sale at the show for a mere €300,000.

Top Marques is always on the lookout to bring on board Monaco businesses, and the launch of one of the world’s fastest drones, by Monaco innovators MC-CLIC, capable of flying 30 metres per second, was a perfect match. The drone is for sale for €800 (but replacement parts cost as little as €5-€10). There were whispers of a drone versus supercar race on the closed F1 circuit during the show.

Throw into the World Premiere mix, Dendrobium, a two-seater all-electric concept supercar by Vanda Electrics, with a target top speed in excess of 322 km/h, and a 40,700 ton luxury cruise liner, Silver Muse by SILVERSEA, the show’s largest ever luxury exhibitor (which will also recreate a cabin at the Grimaldi Forum and offer visitors a virtual cruise experience) and it’s easy to see why Top Marques has cemented itself as the car show in Monaco.

“We discovered this year an enormous amount of products that were not worthy of the showcase of Monaco,” Mr Saltzman, Top Marques Sponsorship Director, told Monaco Life. “We scour the world for diversity and innovation, but we always favour investment and innovation from Monaco, which is why we have Jean Boulle, MC-Clic and Frangivento. However, it has to stand on its own merit.”

Monaco’s own VENTURI E-formula team, with guest appearances by drivers Stéphane Sarrazin and Maro Engel will be on hand at this edition of Top Marques. And more than 25 cars will be available for test drives from the Grimaldi Forum, Thursday and Friday on public roads and on Saturday and Sunday, on parts of the F1 track featuring famous corners such as Tabac and Rascasse.

Top watch brands including Franck Muller, Greubel Forsey, Atelier DeMonaco Urwerk as well as more than a dozen haute jewellery brands, plus an unprecedented collection of art including a “Pop-up” gallery by Laurent Strouk in Paris, and works by British sculptor Paul Day, whose memorial dedicated to British soldiers was recently unveiled by Queen Elizabeth II in London.

“What makes Top Marques unique,” Mr Saltzman pointed out, “is that you can meet the people who actually design the things on display at the show.”

In closing the morning’s press conference, Mr Saltzman said, “We would like to thank our Patron, HSH Prince Albert, for his support of Top Marques from its inception, as well as our partner in this adventure, the Edmond de Rothschild Group. We are also very grateful to our sponsors Dotta Immoblier, Burgess, Silversea, La Societe des Bains de Mer, La Direction du Tourisme et des Congrès and Meregalli.” He added his appreciation for Stars’n’Bars for their support and said this year there will be an after-party at L’ÉTÉ.

Speaking to Monaco Life, Mr Saltzman explained, “We consider ourselves a supercar show, which means that certain types of vehicles don’t make our grade. We avoid mainstream and mass production, for example. So that puts us in a niche, but we are also a lifestyle show so we solicit innovations like flying cars, which would not be seen at a traditional auto show. We see other cars shows in Monaco in a different league. We’re inside and we’ve been here for 14 years.”

Given that advance ticket sales are three times ahead of where they were last year, the Top Marques team is confident they’ll break last year’s figure of 42,000 entrances.

For more information about tickets or exhibitors, see the Top Marques Monaco 2017 website.

Silver Muse revs up at Ferrari Land before Monaco voyage

Me and McLaren, the Top Gear of Monaco 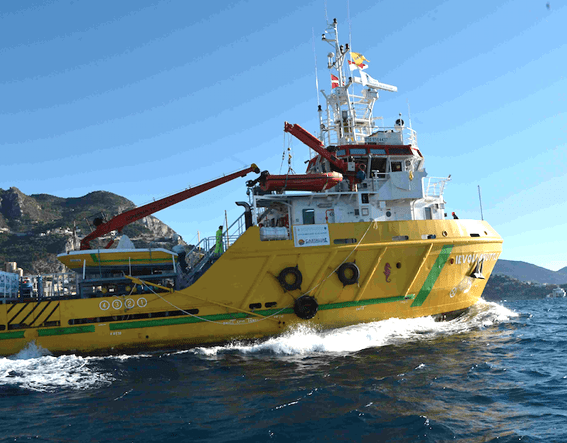 As part of the celebration of the 40th anniversary of the RAMOGE cross-border agreement, an anti-pollution exercise was conducted on April 27 to demonstrate and maintain the expertise of the three signatory states, the Principality of Monaco, France and Italy…

The scenario involved a ‘collision’ off Menton between two ships, resulting in an oil spill, the activation of crisis centres in the three countries and the initiation of the RAMOGEPOL emergency plan. Each national authority was able to measure the effectiveness of its own implementation, and in particular coordination with CEPPOL, the oil-spillage authorities. More info: www.ramoge.org. Exercice de lutte antipollution RAMOGEPOL 2016 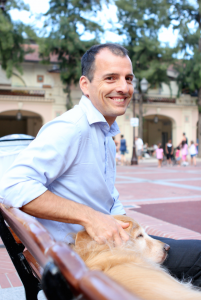 Most dog owners think that their dogs are wonderful and unique, and after spending some time with the Golden Retriever, Maya, we must agree that she is a pretty special canine.

“We got her from a breeder in the US when she was 3 months old, and she is 11 years old now.  She was the princess in our house before our sons were born, but now her place has gone down a bit.”

“She loves the sea, and she loves to swim more than anything else.  She will even go in the water in the middle of winter…and then shiver for 3 hours afterwards.”

3.  Does she get on well with everyone?

“She can be a bit snobby, mostly she just ignores most other dogs.  If provoked she gets very aggressive and the other dogs generally run away quickly.”

4. What makes Maya most happy?

“She is really driven by three things; food, petting, and swimming.”

“She loves to eat, and eats most everything although we try to give her a mainly raw diet.  She especially loves broccoli and comes running as soon as she sees it.”

“She is a great companion and when you have a dog it makes people smile and stop to chit-chat.  It connects you to other people.”

“We take her everywhere and take trips by car so we can bring her.  She is a member of the family.”

8.  Maya is so calm and mellow, how did she get to be like that?

“Good breeding mostly, we choose her very carefully.  And she has an amazing capacity to understand.  She spends most of her time off the leash and is extremely obedient.”

9.  What makes Maya such a special dog?

“She is good at reading your moods.  The moment I think about her, she comes to me.  She rarely disobeys.  She is practically a person, or at least one of the world’s best dogs.” 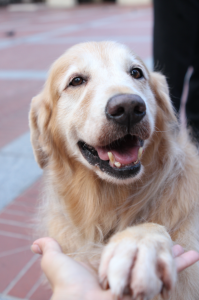