Superyacht Chef Competition has a winner

Superyacht Chef Competition has a winner 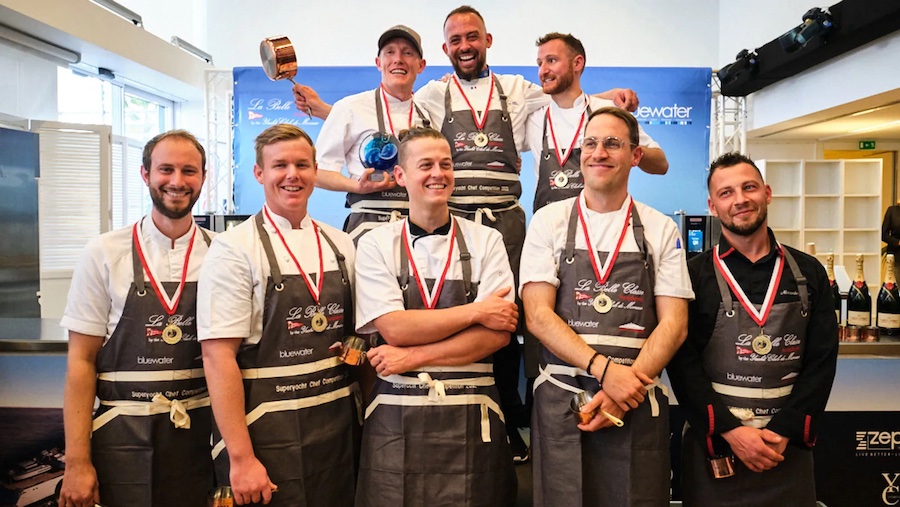 The Monaco Yacht Club’s Superyacht Chef Competition has found its champion in Nicolas Petit, the cuisinier for the 43-metre ship Latitude.

It was no cake walk for the competing chefs in the Monaco Yacht Club’s (YCM) Superyacht Chef Competition, held on 8th April at the Yacht Club.

The event, hosted under the aegis of La Belle Classe Academy training centre in conjunction with Bluewater, had a jury of tough nuts, led by Michelin star Chef Nicolas Sale of La Table de l’Espadon and Le Jardin de l’Espadon at the Hôtel Ritz Paris.

Nine contestants gave it their all, each creating their own special dishes using only what was given to them in a mystery basket of ingredients. They were asked to use them all or risk being penalised under the new no-waste criteria.

In the end, it was Latitude’s head chef Nicolas Petit who walked away with the honours after serving his duck breast, mousseline of peas and black garlic, baby carrots in a duck jus followed by a tuile with pineapple roasted in rosemary.

After making it through the first three qualifying rounds of 40 minutes, Petit was pitted against Swindells and Holmes for the final.

Petit was humble about the win, saying, “It’s such a surprise and great recognition, I’m really overwhelmed. The most difficult part was managing the wait when you can see all the others cooking and you just want to get going.”

The Yacht Club saw this as a unique opportunity to spread their ecologically slanted word.

“It’s a special event that is all about sharing values that we hold dear at the Yacht Club de Monaco,” said YCM General Secretary Bernard d’Alessandri.

“It is very much in line with Monaco, Capital of Advanced Yachting, an approach that aims to position the Principality as a destination synonymous with excellence in the luxury yachting sector.”

Monaco has long been advocating sensible, sustainable and environmentally friendly yachting practices, but in recent times has really pushed for those values to be spread throughout the industry.

The last Superyacht Chef Competition was held in 2019 and was won by Stephanie Gravier from the 73-metre Planet Nine. The next edition will be held in April 2023.