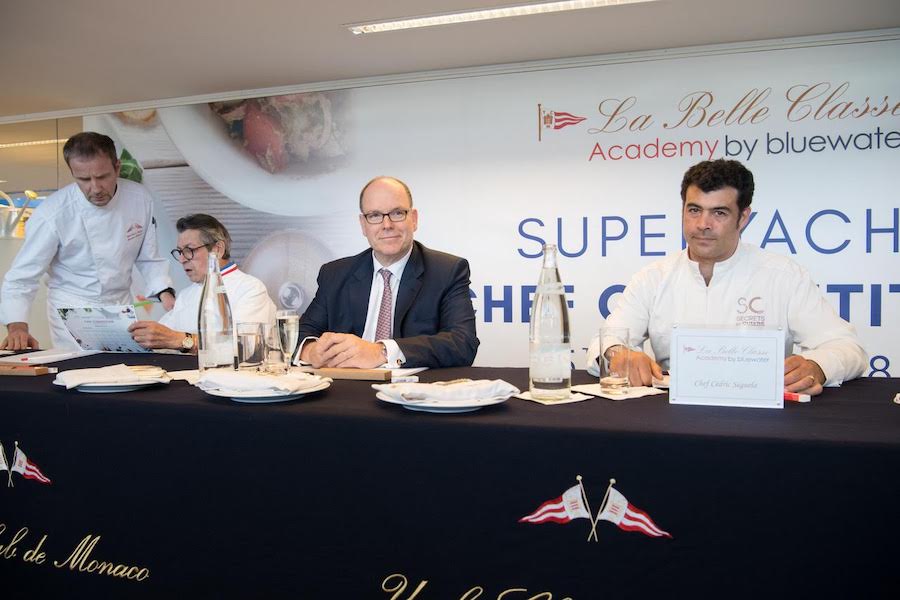 Bluewater and the Monaco Yacht Club are teaming up once again for the Superyacht Chef Competition, where nine superyacht chefs are challenged to create delicious cuisine from limited ingredients.

Food is the great unifier. Not only does it nourish and give the fuel needed for our very survival, it is also something meant to be savoured and enjoyed, something that brings people together in ways not many other things can.

The making of food has been elevated to an art form, with chefs as the artists in residence. Restaurants are made or broken by the inventiveness of chefs, and arguably the same can be said of chefs who work on the superyachts. These culinary wizards work in tight spaces, with spotty access to ingredients, and are expected to make incredible meals for owners and guests every day and night of their stay.

So, when Bluewater and La Belle Class Academy training centre of the Monaco Yacht Club joined forces for an event specifically aimed at superyacht chefs, it was sure to be explosive. So was born the Superyacht Chef Competition.

“Our wish is to position Monaco as a centre of excellence in the yachting sector, including in the field of training,” said Bernard d’Alessandri, Secretary General of the Yacht Club de Monaco. “This type of competition makes it possible to demonstrate the exceptional skills demonstrated by the chefs on board the superyachts.”

The 2022 edition will include nine chefs from different countries going toe-to-toe on superyachts over 40-metres, such as the M/Y Black Pearl and the M/Y Hampshire.

Each chef will be asked to prepare a meal comprised of items received in a mystery basket created by Chef Joël Garault with the help of Maison del Gusto, in this case seasonal seafood products. The contents will only be revealed just prior to the start of each preparation.

Then, three 40-minute rounds ensue, narrowing down the competitors from nine to three finalists who will again prepare and present a dish and dessert for the judges to choose from. This format has been the way of all past competitions, but this year, there is an extra challenge. For the first time, chefs will have to follow a no-waste rule which will be overseen by Chef Gilles Brunner, culinary teacher at the Lycée Technique et Hotelier de Monaco. The idea is simple: all products from the basket must be incorporated into the dishes. If there is anything left over, the chef will be penalised.

The jury is comprised of a talented roster of known chefs including Nicolas Benoit, voted Best Ouvrier de France in 2015 in the ‘gourmet cuisine’ category and professor at the Ferrandi School of Gastronomy in Paris, alongside Nicolas Sale, head of two Michelin-starred gourmet restaurants and International President of the Disciples of Auguste Escoffier. They are joined by starred chef Didier Anies, elected Meilleur Ouvrier de France in 2000 and current executive chef at the Château de la Tour in Cannes.

The jurists will be led by chairman Guillaume Gomez, Ambassador of French gastronomy and member of the Disciples of Auguste Escoffier, who officiated in the kitchens of the Elysée, and supervised by Joël Garault, President of Gouts et Saveurs,

The Zepter Group are providing the tools and knives necessary to assist the nine chefs in completing their tasks under tight deadlines in workstations which mimic the small galley areas found on many yachts. Yacht owners and food lovers are invited to watch as the chefs work wonders under pressure in these restricted conditions.

Through this event, the Yacht Club de Monaco intends to honour certain trades of the Grande Plaisance, which brings together 252 companies in the Principality, and positions Monaco as the Capital of Yachting.

The Superyacht Chef Competition is being held on 7th April at the Monaco Yacht Club. Registration is now open at academy@ycm.org