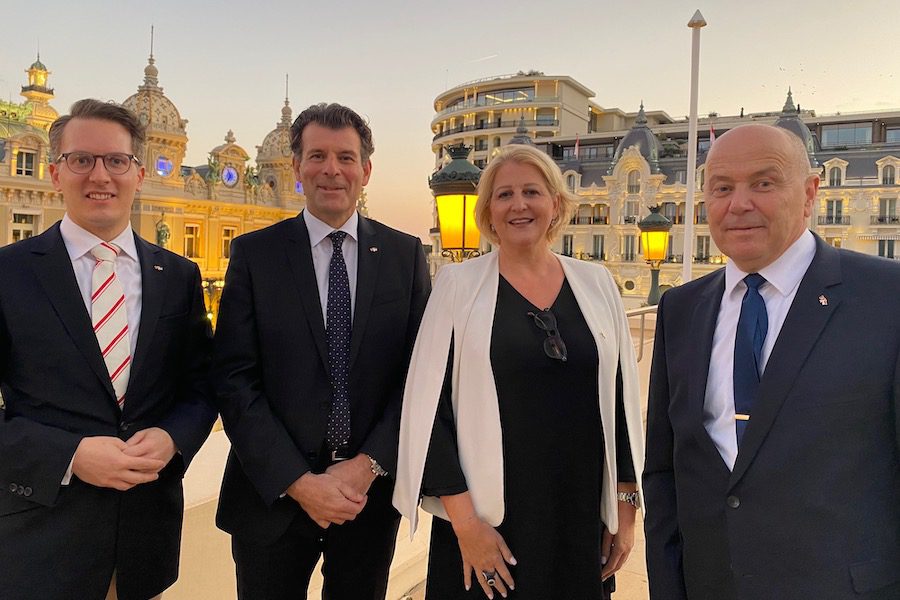 A number of high-ranking visitors from Switzerland joined numerous guests in Monaco to celebrate the accreditation of the new Ambassador and the Consul General of Switzerland by Prince Albert.
To mark the accreditation of Swiss Ambassador Dr. Roberto Balzaretti and Swiss Consul General Andreas Maager in Monaco, the Consulate General of Switzerland in Marseille organised a cocktail dînatoire in the Salon Bellevue of the Café de Paris on Thursday 14th October. They were joined by numerous representatives from the political, business and social spheres.
The evening was opened by Dr. Arik Röschke who, as president of the traditional Club Suisse de Monaco, welcomed around 150 guests. Afterwards, Andreas Maager, the new Consul General of Switzerland based in Marseille, addressed the audience. Mr Maager has worked for the Federal Department of Foreign Affairs (FDFA) since 1984. As Consul General, the St. Gallen native was stationed in Cape Town and Atlanta before Marseille. The Swiss Consulate General in Marseille was founded in 1799 and is one of Switzerland’s oldest consular representations. In his function, Consul General Maager is responsible for around 25,000 Swiss abroad, 3,906 of whom have found a home in the Alpes-Maritimes region. He once again congratulated the new Ambassador on his accreditation as Ambassador of Switzerland to Monaco and handed over the floor. Ambassador Dr Roberto Balzaretti was Chief EU Negotiator prior to his assignment in Paris. He jokingly asked those present to address the Consul General directly in passport matters, leading to plenty of amusement in the hall.
After the French, Italians and English, the Swiss form the fourth largest community in Monaco with 1,148 people.
The Principality of Monaco opened an embassy in Bern in 1959. Since 2006, the Swiss ambassador based in Paris has been accredited to the Principality. Contacts between the two states take place mainly at multilateral level in the institutions of the United Nations (UN), the Organisation for Security and Cooperation in Europe (OSCE) and the International Organisation of the Francophonie (OIF).