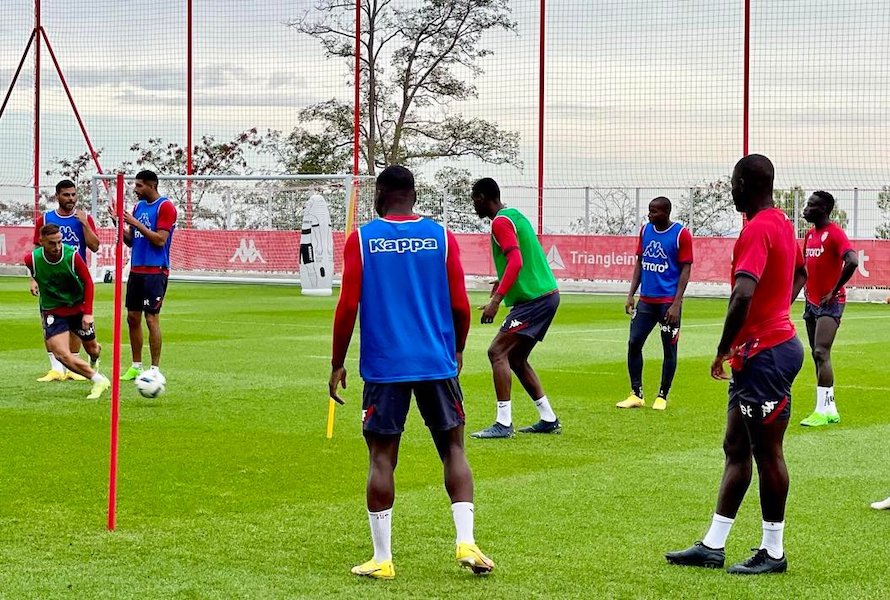 Despite suffering from a numerical disadvantage for the vast majority of Saturday’s match at the Stade Louis II, a tactically astute Monaco took a worthy point against an impatient, impotent Rennes.

The state of the game was perfectly summarised by Rennes manager Bruno Génésio post-match, who said, “It isn’t a point stolen for Monaco, because I think it was even they who had the clearest chances in the match, both in the first and the second-half.”

How not to play against 10

Rennes provided an exhibition of exactly how not to play against 10 men. Having dominated the opening 15 minutes of play, Youssouf Fofana’s red card marked a turning point, but not in a positive sense for Génésio’s men.

Admitting that his side looked better against the 11 men of Monaco rather than the 10, Génésio bemoaned his side’s attacking play, stating, “I don’t think we did enough in the second-half in particular. We took a lot of shots from outside the box when we should have better prepared our attacks, worked our way into the box and penetrate like we did for our first goal. We didn’t do that enough, because we didn’t make the right choices and we rushed things. Maybe also because we have our heads in last year. We need to have players free and to find them quicker.”

Their impatience in attacking phases was clear to see, especially during the second-half as the side got increasingly frustrated at not being able to make their extra man count. Rather than using that man to create 2-v-1 scenarios, they often used Baptiste Santamaria as their source of progression. Sitting deep, he launched balls towards Monaco’s back-line, but the home side’s compact, tall defence had little difficulty repelling the threat that these balls caused.

Sitting in a low-block Monaco were largely impenetrable, consigning Rennes to long-range efforts. In the second-half, 7/10 of Rennes’ shots were from outside the box, whilst the away side only managed eight passes (not including crosses) within 20 yards of Monaco’s goal throughout the whole match. For comparison, Monaco completed only one fewer with seven.

In short, offensively at least, Rennes were impatient in possession, unwilling to take the necessary time to construct the attacks to effectively work their numerical advantage into overloads.

But their attacking output was also hindered by their lack of intensity in the defensive phases. Rennes, bizarrely, looked most dangerous in the first 15 minutes, when they were playing against 11 men.

During that time, out of possession, Rennes played in a 4-1-4-1 formation, making it difficult for Monaco to build from the back. Often the Monaco defenders were forced back to Alexander Nübel, who faced with no safe short options was forced to clear, making Monaco reliant on second balls, which they struggled to win.

Progression was difficult and possession difficult to maintain. However, following Fofana’s red card, Rennes altered their pressing structure, moving Flavian Tait back alongside Santamaria into more of a pivot.

This move allowed Monaco to gain a foothold in the game by opening up one of the central midfielders as a passing option. From there, Monaco couldn’t exactly dominate possession, which is understandable, but when under the cosh, they could rely on one of either Jean Lucas or Soungoutou Magassa being available, allowing them to progress and maintain the ball.

Philippe Clement’s men only had 33% of the ball in the first-half, but increased that to 35% in the second-half, despite Monaco having a full cohort on the pitch for a third of that first-half. Rennes let Monaco off the hook and allowed them to gain a foothold into the game, and they were punished for that.

Offensively, the change in pressing structure also handicapped Rennes. Génésio’s side looked most dangerous in transitions after having won the ball back inside Monaco’s half and then by progressing the ball vertically, either with carries or passes. Abandoning that more intense, high-pressing and rapid transitional style, Rennes looked relatively blunt as an attacking force thereafter.

Whilst Rennes’ shortcomings in the match were clear, Monaco are worthy of high praise for the way they defended, as well as for the way in which they exploited transitional phases of play.

Clement deserves praise for his bold move in taking off WIssam Ben Yedder in light of the red card, which duly afforded them a greater level of defensive solidity. His team were compact, resolute and aggressive in their defending.

A key component of that staunch rear-guard was the man who replaced Ben Yedder, Magassa, who looked unflustered at making his professional debut in difficult circumstances. He was calm in possession and intelligent out of it, covering player’s such as Caio Henrique when they committed to the press.

He made more tackles (5) and more pressures (18) than any other player on the pitch. His positional awareness stood out in particular, and although it is much too soon for comparisons to Aurélien Tchouaméni, the way in which he positioned himself in between passing channels was certainly reminiscent of the now Real Madrid midfielder.

He duly profited from the drop-off in intensity from Rennes and often found himself free in the number 6 role, and as a constant option, he was also a source of ball progression in Monaco’s midfield, whilst he also allowed Monaco to retain possession and alleviate pressure.

The title for most progressive Monaco midfielder on the day, however, goes to Jean lucas, who has begun the season in brilliant form. He backed up his positive display last week against Strasbourg with another excellent performance here.

The Brazilian completed the most progressive carries of any Monaco player (7) and he also completed 86% of his 43 attempted passes. Although the incoming Mohamed Camara will pose a high-level of competition in the centre of the park, Jean Lucas has shown himself capable of delivering when called upon.

Another player looking resurgent at the start of this new season is Aleksandr Golovin. The Russian midfielder has struggled with injuries whilst at the Principality club, but having returned towards the back end of last season, he has started to flourish within Clement’s side.

Although the majority of Monaco’s attacks came down the right hand-side, the most dangerous came down the left, and through Golovin. His dribbles inside were incisive and dangerous, and he also worked nice interchanges with Breel Embolo up front; the signs for their on-field relationship are positive.

Not necessarily known for his defensive work, he was also intelligent in the press, forcing the opposition to play passes inside and into a congested area of the pitch. His implementation of Clement’s pressing instructions was another key arm of Monaco’s defensive efforts. A place in L’Équipe’s team of the week was just reward for his efforts.

Whilst Rennes certainly played a part in their failure to take all three points from the Stade Louis II, Monaco’s defensive solidity and “solidarity” as Clement put it, were worthy of a point – and perhaps more.