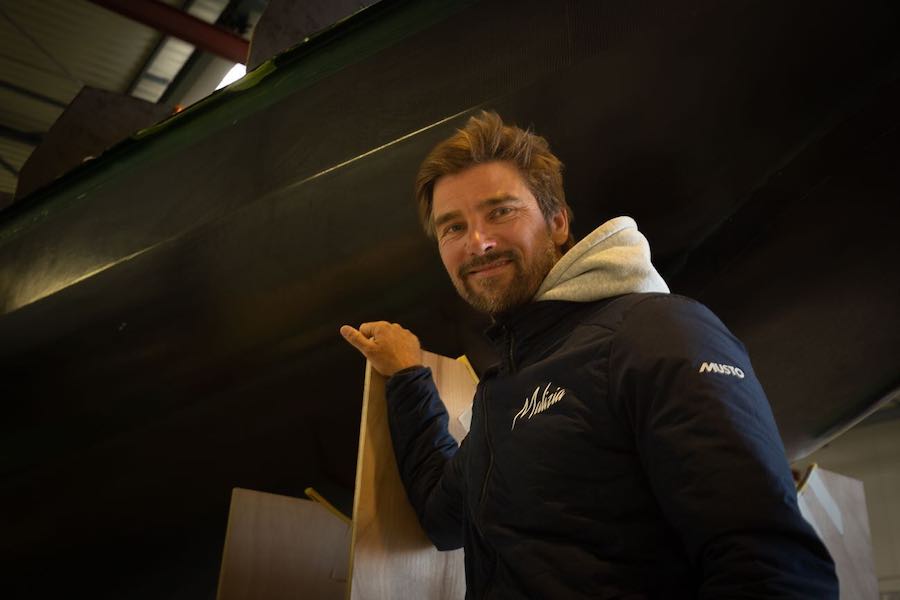 Team Malizia, the Monaco Yacht Club racing team headed by Pierre Casiraghi and Skipper Boris Herrmann, will have a new boat in July 2023 for a busy racing schedule, as Herrmann prepares to contest the 2024 Vendee Globe.

The Monaco Yacht Club lounge was the scene for the unveiling of plans for the new boat being built for Team Malizia. Dubbed the Malizia III, the new 60-foot boat is intended to be used in the 2024 Vendee Globe, the legendary solo around the world competition that Skipper Boris Herrmann completed in 2021 on Malizia II.

He completed the race in 80 days, 14 hours and 59 minutes, coming in a respectable fourth place after colliding with a fishing boat just hours from the finish line.

“This is the first time that we have built our own boat,” Herrmann said. “We were able to bring our vision and our ideas, with a new boat with rounder shapes, not very fast on calm seas, but efficient in rough seas, as we expect to face in the next Vendee Globe.”

While the Vendee Globe isn’t until the end of 2024, Herrmann is already positioning himself to take the helm a second time for the race, something not many sailors have the gumption to do.

Naturally, the team is not limiting themselves to just the one race. On their programme are several prestigious events, including the 2023 Route du Rhum, the Ocean Race in mid-2023, the Transat Jacques Vabre at the end of 2023, and two France-New York transats in 2024.

The new boat will be heavier than the Malizia II and will be in the shape of a banana, it was revealed.

“Boris made difficult decisions for the purpose of the boat, we don’t know if it will pay off, but I sincerely think that we have taken the right direction,” said Pierre Casiraghi.

Team Malizia’s ocean racing is hugely important, but just as important is the environmental work they do. On the open sea, the team gathers samples from remote places for scientific observation, an invaluable resource for scientists. The team also educates children about ocean preservation and other environmental issues, in the hope that the next generation will have respect for the world around them.

“Our desire is to speak to young people and to involve all the children of the sailing school,” Casiraghi says. “They are curious and want to protect their environment. It is a pleasure to work with them.”