Telework to continue long after pandemic

Telework to continue long after pandemic 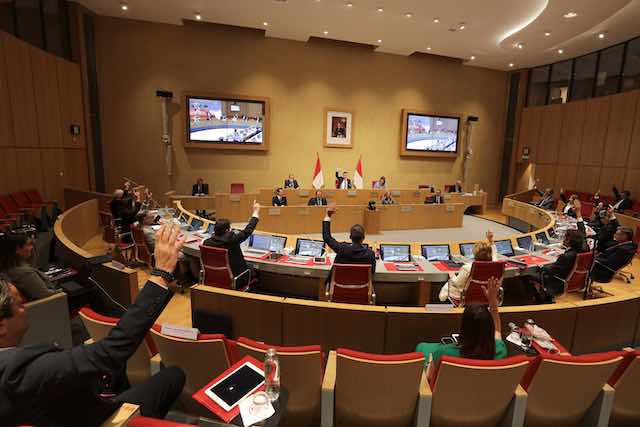 The National Council has unanimously voted in a bill making telecommuting obligatory in the Principality for those whose jobs permit it.

Tuesday night’s National Council meeting covered much ground on the topics of telework and employee rights.

President of the National Council Stéphane Valeri, who has long been an advocate of telecommuting, told the Assembly: “The text we are about to vote on allows us to respond, with a humanist approach, to the understandable fear by some employees of being victims of unfair dismissal at a time when it would be almost impossible to find a job.

So, to help limit the spread of the virus and in order to protect not only the health of employees and employers but also of the whole population, this law makes compulsory teleworking for all positions that allow it, as long as travel is limited. Telework is strongly recommended and therefore will be facilitated for as long as this health crisis lasts. In this difficult period, telework has been brought to the fore and its effectiveness has been lastingly proven.”

Telecommuting was also praised by Minister of State Serge Telle, agreed, saying, “The obligation to telework in positions that allow it is a remarkable compromise and particularly useful in the context of the current crisis.”

The minister believes the epidemic could prove to be an opportunity to change the way people work in general, saying that “this text allows a certain number of particularly concrete advances in the contractual, social, health and even criminal fields, among which (…) teleworking is strongly encouraged and facilitated during the crisis and even after.”

The backing of the National Council and the government on this issue could mean a significant shift in the way employees in the Principality work. Prior to lockdown, only 1,119 people were telecommuters on a full-time basis. These new rulings could increase that number immensely.

According to studies, the benefits for both employee and employer of working from home include an overall increase in productivity linked to less interruptions, improved employee morale and work quality, less office space required saving employers in rent and utility costs, less stress on the environment due to less cars on the road, and improved employee retention and loyalty.