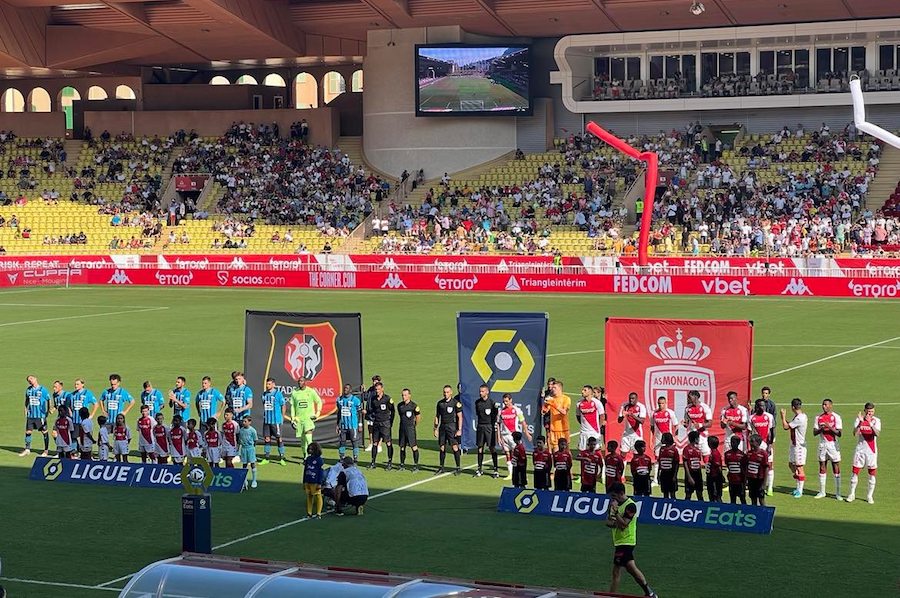 Youssouf Fofana’s early red card looked to put pay to AS Monaco’s chances of earning a result against Rennes, but Breel Embolo’s second-half goal salvaged a draw on Saturday.

Philippe Clement was left bemoaning a decision that could potentially have ruined the game as a spectacle. “If that was a red, we will have a lot this season,” said the Belgian coach post-match. But in front of a packed house at the Stade Louis II, Monaco dug deep to frustrate Rennes, despite the latter’s numerical advantage for over 75 minutes.

Looking for their first win of the season, Rennes started on the front foot. Their intelligent high pressing prevented Monaco from retaining possession and the home side found themselves in the unfamiliar position of having to chase after the ball in the opening minutes.

However, the first big chance of the match fell to Vanderson, who cut in on his left foot just outside the box to rifle a shot onto the bar of Steve Mandanda’s goal. Monaco were growing into the game, but their progress was curtailed just moments later when Fofana was shown a straight red for a marginally late challenge on Martin Terrier.

The VAR didn’t see enough to overturn the decision, and Monaco faced the tough task of trying to salvage something, anything against a side, who last season only very narrowly missed out on Champions League football.

Clement, naturally, prioritised defensive solidity; off came captain Wissam Ben Yedder and on came young Soungoutou Magassa to make his debut in difficult circumstances. Embolo stayed on to lead the forward line, to hold the ball up and hassle and harry in the press.

Rennes mustered a string of half chances, drawing saves out of Alexander Nübel, but the best chances of the first-half would surprisingly fall to Monaco.

Mandanda clattered into Embolo in the box, landing a fist on the Swiss international striker’s head. Unsurprisingly the penalty was awarded, but the veteran goalkeeper can consider himself lucky not to have received a red card.

Mandanda made the most of his reprieve. Without Ben Yedder and Kevin Volland on the pitch and given that Embolo had just taken a severe blow to the head, Axel Disasi took the responsibility and stepped up to take the penalty. His penalty lacked power and Mandanda guessed right to keep the scores level.

Mandanda was decisive once again just seconds later as an outstretched arm denied Krépin Diatta one-on-one from close range, before Vanderson blazed over at the back-post when he ought to have done better. Despite the red card, Monaco would have been disappointed not to be leading going into the break.

Against the run of play, Rennes took the lead in the second-half. Gaëtan Laborde slotted past Nübel from close range after a Benjamin Bourigeaud shot was bundled into his path. A goal down and a man down, Monaco had their work cut out to salvage anything from a tie that they had largely dominated, but they were given a lifeline thanks to a goalkeeping howler.

Dogan Alemdar, on for Mandanda, who was taken off at half-time due to an injury sustained during that clash with Embolo, was caught napping. Embolo steamed in to tackle the goalkeeper, who was caught unawares and the tackle itself was enough to divert the ball into the back of the net.

Thereafter, neither side could break the deadlock. Rennes pushed for the winner, but the well-set Monaco defence remained resolute and didn’t allow the away side a sniff at goal. The game finished 1-1 and Monaco remain unbeaten in the league since 13th March, whilst Rennes remain winless.

Post-match, Clement praised the “solidarity” of his players. “There are good things to take away,” began the Belgian coach. “But I’m ambitious and I want to win every match. I regret Fofana’s red card in the 15th minute, which I found severe in the circumstances. After that, the players showed an irreproachable spirit and a great solidarity,” he continued.

Monaco next welcome RC Lens to the Stade Louis II next Saturday, where they will be hoping to build on the strong start to the season, and take revenge on a side that deprived them of second place in the league in the dying seconds of last season. 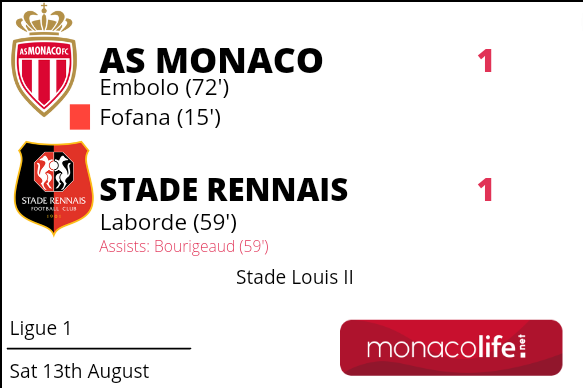