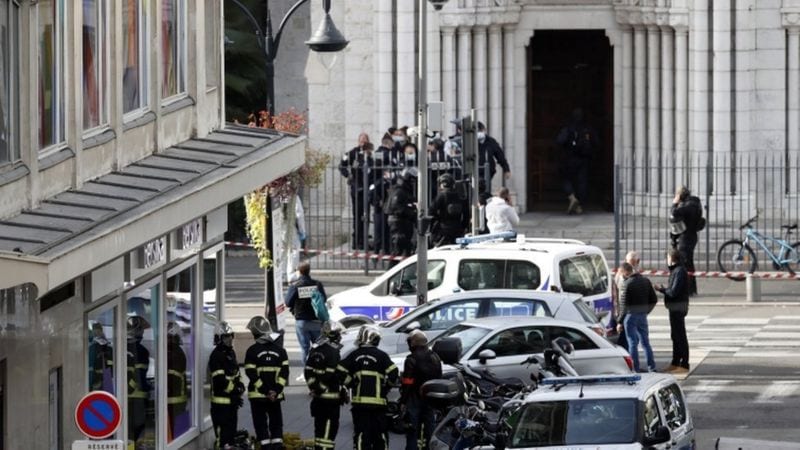 Three people are dead and several others are injured following a terrorist attack in the Notre Dame Basilica in Nice Friday morning.
Gun shots rang out in the centre of the city at around 9am as police shot and injured an assailant who had allegedly killed at least three people in a knife attack at the church.
According to reports, a 70-year-old woman was “partially beheaded” and the church sexton was stabbed to death – both inside the church.
The third victim, a 40-year-old woman, was stabbed in the church but managed to escape to a nearby café. She died shortly afterwards from her injuries.
Police believe the attacker, who has been named as ‘Brahim’, was acting alone.
The Notre Dame church is located on Avenue Jean Médecin, the busiest street in Nice.
In a brief address to the press after the attack, Nice Mayor Christian Estrosi said: “My first words are my condolences to the relatives and friends of the victims and the parish community, and all the people of Nice who are in shock. Nice, like France, is paying too heavy a price of Islamofascism. The attacker did not stop repeating ‘Allahu akbar’ even under medication (…) Enough is enough.”
Monaco’s response
At the beginning of his address to the Principality on Thursday night, Prince Albert said: “My thoughts go to our friends in Nice who have been so viciously attacked at the Notre Dame Basilica. My condolences to the pain of the families and those affected.”
President of the National Council Stephane Valeri has expressed his condolences and those of the council to the families of the victims of Friday’s dramatic attack in Nice.
“The National Council shares the dismay and pain of our neighbours and friends, the Niçoises, and the entire French community,” said Mr Valeri in a public statement.
In a letter to Mayor of Nice Christian Estrosi, Mayor of Monaco Georges Marsan said he was “deeply shocked and saddened by the ignoble attack which struck your city. The members of the Communal Council, the entire population of Monaco and myself, wanted to testify to you and to all the people of Nice, our support and solidarity at this painful time. Our thoughts are with the victims and their families.”
UPDATES:
4.10pm – French President Emmanuel Macron has just given a public address in front of the Notre-Dame Basilica in Nice, saying: “Once again, a terrorist attack has targeted our country. Three of our compatriots fell in Nice. Very clearly, it is France which has been attacked. At the same time, a French consular site in Saudi Arabia was attacked (…) We are attacked for the values ​​which are ours. We will not give in to any spirit of terror.”
The president said that an additional 4,000 soldiers will be brought in to the country to protect places of worship for All Saints’ Day, and schools as they head back to classrooms on Monday.
3.30pm – France has raised its terrorism alert level to its maximum “urgence attentat”, Prime Minister Jean Castex told the the National Assembly. “The President of the Republic has convened a defence and national security council for tomorrow morning,” he added.
2.10pm – Pope Francis Tweets: “I am with the Catholic community of #Nice in mourning the attack which sowed death in a place of prayer and consolation. I pray for the victims, for their families and for the beloved French people, so that they can respond to evil with good.”

2.06pm – Éric Ciotti, member of the National Assembly for the Alpes-Maritimes, said in a social media post that the attacker in Nice is a Tunisian who arrived very recently via Lampedusa.
1.50pm – French President Emmanuel Macron has arrived in Nice and was met by Mayor Christian Estrosi.

11.48am – Another suspected attack has occurred in Avignon, France. A suspect with a knife reportedly shouting “Allahu Akbar” has been fatally shot during an attack on police officers in the southeastern French city.
11.40am – The attacker in Nice has reportedly been admitted to intensive care, as local media reports that a second assailant may be on the run in the city. They have urged residents to be cautious.