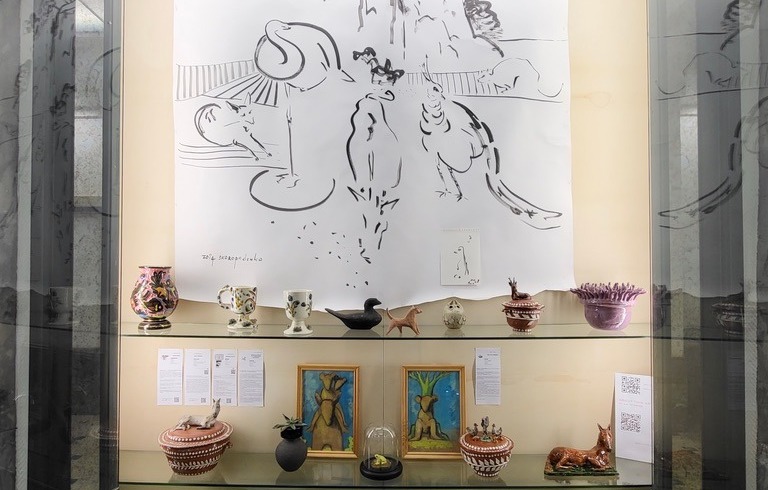 A new exhibition of contemporary art called The Animals is on at La Vitrine Contemporaine de Monaco celebrating creations of our four-legged friends made by local artists, past and present.

Tying in with the Nice Carnival’s 2022 Animal King theme, La Vitrine Contemporaine de Monaco is presenting a purr-fect mix of historic and new pieces from an array of talent featuring animals as their theme.

The gallery, founded by artist Zoe Skoropadenko in 2009, was opened initially to showcase her own works, but has grown to become a place for emerging Monaco-based artists to share their works, as well as one where pieces from the past are brought back to life. For The Animals, she will display drawings of animals from the Zoological Garden in Monaco.

In addition to her work, the exhibit will feature pieces by Gerard Pettiti, known as the Bernard Buffet of Monaco, whose dark, strong works have made him a distinctive player in the local art scene. His diptych featuring bears is a beautiful departure from his usual favourite subject, birds.

Ceramic anemone by Agnes Roux will also be on display. Roux’s passion for nature is shown in all her pieces which are inspired from everyday trips around the Principality to the beach, parks, and of life under the sea.

Self-taught guest artist Bernard Vitour once trained as butcher. This occupation didn’t stick, but the experience gave him an ability to craft beautiful clay sculptures featuring animals, which were made jointly with Zoe Skoropadenko.

Made famous by his Fractals oil paintings, artist Clem Chambers has contributed a sketch of small animals from the Monaco Zoo.

Also exhibiting is Dale Dorosh, a French-Canadian ceramist living in Vallauris. Founder of AIR Vallauris, he started working with clay at university. His path then led him to become a professional fencer where he was a member of the Monegasque sabre fencing team. A competition in Vallauris turned his head and he then turned to pottery making. He will be exhibiting a piece entitled ‘Fellow’ at the show.

Pieces from the past will also be showcased, including works from ceramic studio Les Argounautes founded in the 1950’s by Isabelle Ferlay and Frederique Bourget. A horse figurine will be on display from their collection.

One of the oldest pieces in the show will be a tiny ceramic frog made by Delphin Massier from the early 1800s. This will be joined by a ceramic owl made by Monegasque Alberto Diato, who was a friend and contemporary of Picasso and Gilbert Portanier.

Finally, a fish vase from the 1950’s will be part of the series, made in the Cerart factory. Founded in 1934 by Charles Durante, the factory churned out flowers and other plants subjects, but also developed a marine theme later on, which is where the vase depicting Monaco undersea life is from.

The exhibition runs from 20th February to 1st April. Admission is free. For more information, visit the website at www.themeloy.art.