"The COP has turned blue"

"The COP has turned blue" 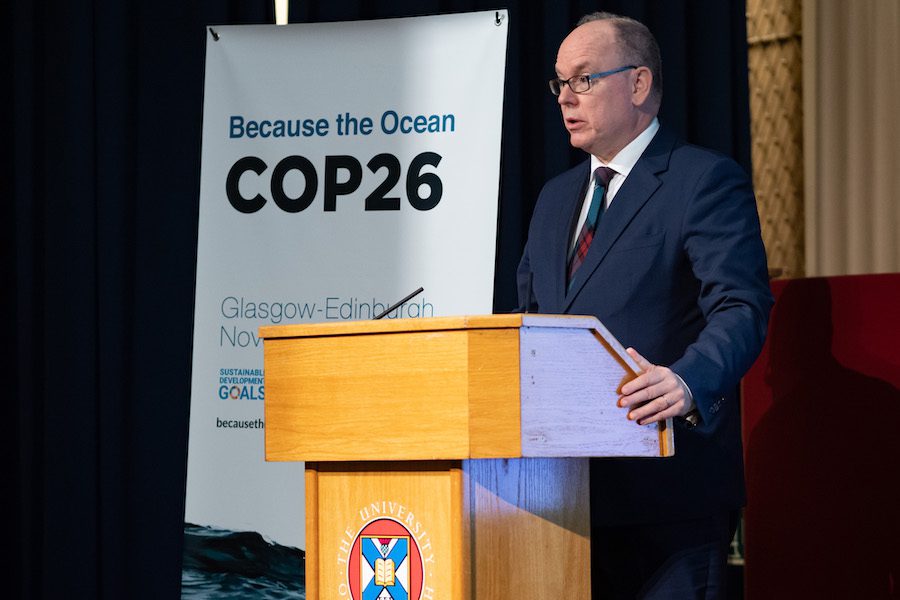 Prince Albert was there for the opening day of COP26, launching the third declaration of ‘Because the Ocean’, an initiative he activated in 2015 that calls for oceans to be part of the solution to tackling climate change.
HSH Prince Albert II of Monaco was joined on 31st October by Chile’s Minister of the Environment and President of COP25 Carolina Schmidt, Pacific Islands Forum Secretary General Henry Puna, and a number of ministers and ambassadors for the launch of the third ‘Because the Ocean’ statement at a special event at the University of Edinburgh.
The 2021 declaration, described as “a plurilateral initiative for a multilateral ocean outcome at COP26”, calls for the adoption of a COP26 decision that encourages all Parties to the UN Convention on climate to better take into account the interaction between ocean, climate and biodiversity in their implementation plans for the Paris Agreement, and to recognise the need for greater ambition at all levels to fight climate change and protect the ocean.
The signatories of the Declaration affirm that they commit to:

In his address, Prince Albert underlined the essential role the ocean plays in regulating the climate by absorbing more than 25% of CO2 emissions and 90% of excess heat due to global warming. He also discussed the impact of warming ocean waters, changes in ocean currents and ocean acidification on marine life, as well as the effects of sea level rise on coastal environments and the increasing number of extreme weather events related to oceans.
“We must fully explore the role of the ocean and strive to better understand it, develop conservation tools, strengthen the means implemented to promote it, improve its governance and take better account of ocean issues in all United Nations negotiations,” said Monaco’s head of state.
Despite the crucial link that exists between the ocean and the climate, it was not until the COP25 in 2019 that the ocean was really taken into account in the work of the United Nations Climate Change Convention. Of the 120 Nationally Determined Contributions (NDCs) submitted prior to COP26 in accordance with the Paris Agreement, 80 refer to action in favour of the ocean. After handing over the presidency of the COP to the United Kingdom, COP25 President Carolina Schmidt said that “the COP has turned blue and all subsequent COPs will be also.”
The launch of the 3rd ‘Because the Ocean’ declaration is just the beginning: more countries are expected to join the initiative before the conclusion of COP26. 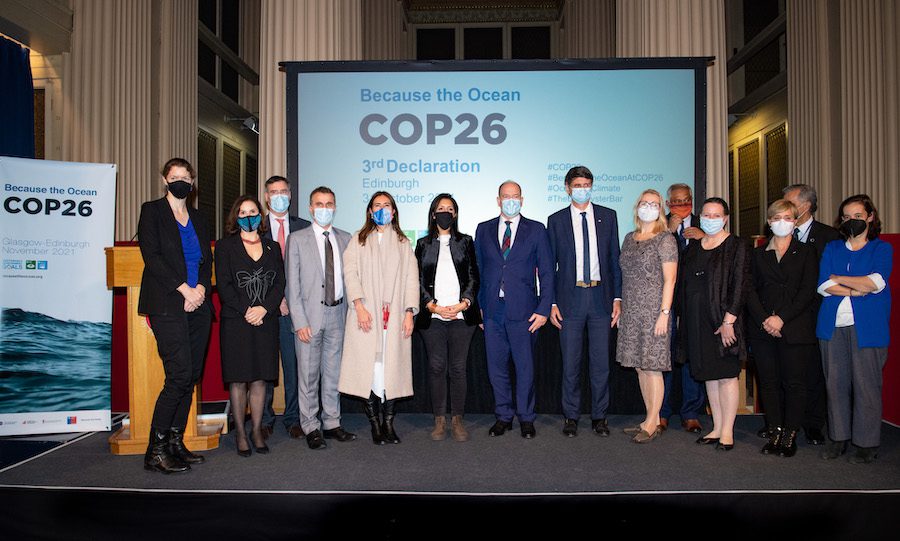 Prince spearheads ocean protection at COP
The ‘Because the Ocean’ (BTO) initiative was launched under the patronage of HSH Prince Albert II of Monaco during the 21st Conference of the Parties to the United Nations Framework Convention on Climate Change (COP21) in Paris in November 2015, calling for better consideration of the interaction between the ocean and climate change within the mechanisms of the convention.
23 countries signed the first BTO declaration, calling for 1) a special IPCC report on the ocean and cryosphere in the context of climate change, as proposed by Monaco; 2) the convening of a conference by the United Nations on the ocean to promote the implementation of SDG14, the sustainable development goal for the ocean; and 3) the adoption of an ocean action program under the United Nations Convention on Climate Change (UNFCCC).
Due to the growing interest in the convention, a second BTO declaration was launched at COP22 in Marrakech in 2016. In this declaration, the 33 signatory countries “encourage the parties to the UNFCCC to consider Submit Nationally Determined Contributions (NDCs) that promote, where appropriate, ambitious climate action to minimise the adverse effects of climate change on the ocean and contribute to its protection and conservation”.
Over the past five years, through awareness-raising and visibility actions, international and national workshops and political advocacy, the ‘Because the Ocean’ initiative has encouraged the integration of the ocean into the debate around climate change policy, commonly referred to as the ‘ocean – climate nexus’, emphasizing that the ocean must be part of the solution to tackling climate change if greater ambition is to be achieved.