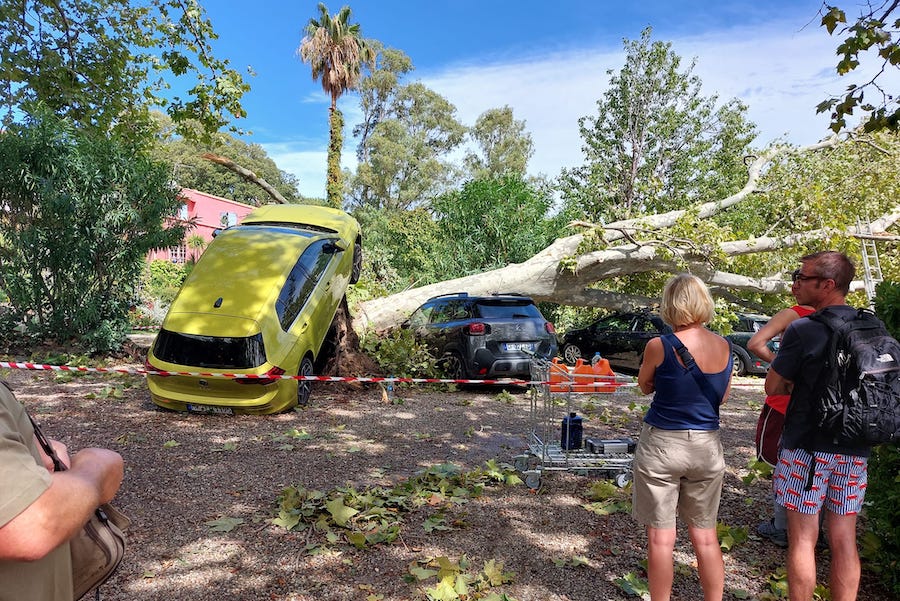 Prince Albert has sent his condolences after hurricane-strength winds and rain ripped across Corsica killing five people, including a 13-year-old girl.

“It’s such a paradox,” Gilles Simeoni, President of the Executive Council of Corsica, told franceinfo. “For weeks we had been living in fear of fires … and this rain which was supposed to be beneficial turned into a deadly windstorm.”

The storm claimed five victims: a 46-year-old man whose bungalow was crushed by a tree in a campsite in Sagone, a 13-year-old girl who was also killed by a falling tree in Corse-du-Sud, a woman aged 72, also in Corse-du-Sud, who was killed when a straw hut’s roof landed on her car, a 62-year-old fisherman whose cause of death has not been revealed, and a female British tourist, who clung to the side of a stricken kayak with her husband for two hours before dying.

A natural catastrophe decree is expected to be approved next week, which will help residents and businesses with insurance claims for damage caused by the storm.

“I was woken around 7:30am by a very huge storm that knocked out both electricity and mobile phone networks,” said Benjamin Roux, a 26-year-old tourist. He had planned to go scuba diving but found himself saving the passengers of a boat who were sleeping aboard when it was suddenly thrown onto the shore by waves.

“They managed to get out without injuries, but they’re just devastated,” he told AFP.

Monaco’s Head of State, Prince Albert, has sent his condolences to the people of Corsica. In a letter addressed to Gilles Simeoni, he says, “With my family and the population of the Principality of Monaco, I would like to express our deep sympathy for you with regard to the dramatic consequences of the violent storms which fell in Corsica.

“In this painful circumstance, I express my deepest condolences to you and express to the families of the victims, to the injured and to all those affected by this tragedy, my feelings of deep sympathy.”

The storm warning in Corsica was only upgraded to orange – the second highest alert level – just moments before the violent storm battered the island, making any emergency evacuation impossible.

During a press conference Thursday, Météo France called it an “exceptional” and unforeseen phenomenon, with extreme winds that had formed in a matter of minutes.

“We were a little surprised by the strength ​​of the gusts, which were quite exceptional and had never been observed before,” admitted Christophe Morel, head of the forecasting office. The situation was “difficult to predict” because “we cannot observe the gusts as long as the storms are on the sea,” added forecaster François Gourand.

Monaco and mainland France bore less of the brunt of the storm than originally expected, although intense rains, which produced flash flooding and fierce hail, did hit much of southern France following weeks of punishing drought.