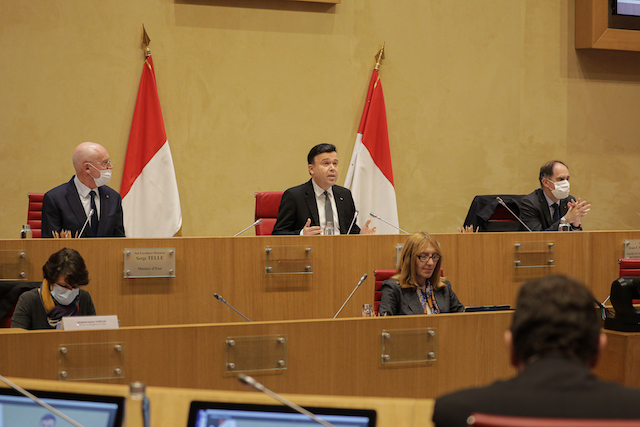 Here is a breakdown of what Monaco’s exceptional 2020 budget looks like and where the €500 million in crisis money is going.
The National Council voted in the exceptional budget on Tuesday 21st April detailing the additional expenses incurred by the Principality because of the Covid-19 crisis. Just a few hours earlier, Prince Albert pledged to halve the operating costs of the Palace
The new fiscal budget of almost half a billion euros A total €358 million is being allocated to industry, trade and tourism. Of this amount, €128 million will come from the government’s emergency slush fund. Meanwhile, €230 million is being directed to health and social measures, in particular temporary unemployment over a period of three and a half months and amounting to €180 million.
Additionally, there are health care related costs of up to €28 million. Of this, €25 million corresponds to a drop in activity at the Princess Grace Hospital, while the remainder is going towards expenses directly linked to the crisis. The cost of masks, hydroalcoholic gel, and tests are estimated at €16.5 million. Finally, there is the operating costs of the Covid-19 Call Centre and the Home Monitoring Centre as well as the €3.5 million in bonus payments to carers. This amount may not be completely accurate, however, as the terms and scope of this bonus are still being debated between the government and elected officials.
The earmarked emergency fund of €128 million includes three items. Namely, the guarantee of €50 million in credits and overdrafts, which are not direct aid, and aid to companies and the extraordinary minimum income, which come in at €42 and €30 million respectively. These two aid packages should benefit 2,800 companies and 2,000 self-employed workers, according Minister of Finance and Economy, Jean Castellini. These measures are meant to cover an extended period up until the end of June.


On the topic of lower overall revenue, the Council looked at a longer term period covering the whole of 2020, taking into account that uncertainties about the economy will last long after the lifting of lockdown measures and the resumption of activities.
The Council is estimating revenue of €174 million, with €135.5 million coming in the form of VAT, €11 million in legal transactions and the rest falling under real estate, finance and the monopolies of the Principality.
The Council revealed that two special treasury accounts have been set up – one will handle advances to businesses, the other the state guarantees for bank loans.
In sum total, the crisis is expected to cost an additional €474 million to the Principality, roughly a third of the original annual budget. According to the Palace, it will put Monaco in a deficit of half a billion euros.
But the Prince has offered some relief, a large cut in the Palace’s operating expenses for 2020.
“The gravity of the situation requires increased rigorous financial management accompanied by significant efforts, in particular for the purpose of an overall reduction in State expenditure,” said the Palace in a statement. “In this context, the Prince has decided to reduce the operating expenses of the Palace with a drop of almost 40% in its endowment, which goes from €13.2 million to €8 million. The Sovereign has full confidence in the solidity of the Principality’s economic and social model to overcome this health crisis with unprecedented economic consequences for his country.”