The mighty have fallen

The mighty have fallen 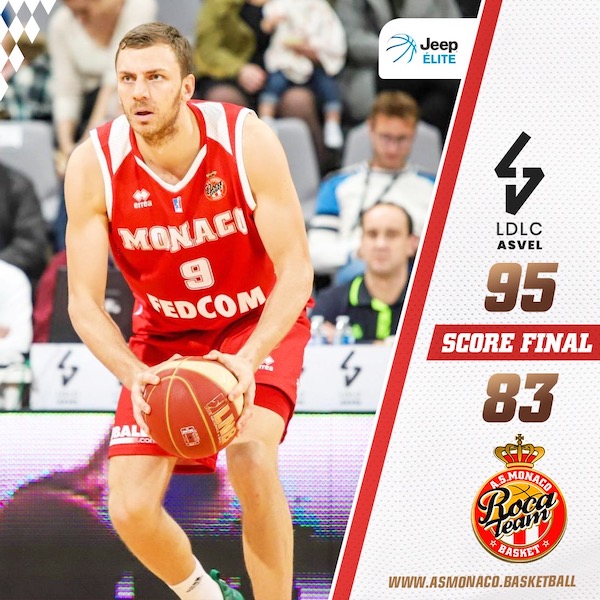 AS Monaco Basketball’s winning streak came to an end on Tuesday night in a tough game against ASVEL Lyon-Villeurbanne.
In a quiet game played behind closed doors at the Astroballe in Villeurbanne, the warrior-players of AS Monaco fell in large part due to the exceptional night had by ASVEL’s star David Lighty. The American had a whopping 24 points on the night, proving not everyone needs a crowd to be fired up.
AS Monaco may not have been victorious, but not for lack of hard work. They played their game not giving in to the rebounds, getting in plenty of two-pointers and made conversions, but it was simply not enough for the juggernaut of ASVEL’s three-point shots facing them to the tune of 27 points on the night.
The match wasn’t enough to roust Monaco from the top spot in the league, though, leaving ASVEL firmly in the number two position, despite being neck and neck in wins along with third ranked Dijon.
The game started off with fouls on the part of the Roca Team, allowing ASVEL to set the pace. It wasn’t until well into the first half that Monaco was able to take the lead from their opponents, when Anthony Clemmons made a superb layup and bought the score to 23-20. ASVEL’s Strazel evened the score fast enough with a three-pointer, followed by Kika’s layup, allowing Monaco a one point lead.
This is when Lighty turned to lightning, and Lyon-Villeurbanne took control. By the break, the score was 41-45 ASVEL.
ASVEL came out swinging with a series of three-pointers by Strazel, Kahudi and Lighty pulling ahead 45-56. The Roca Team didn’t not quit though and slowly began clawing back points with fantastic plays by Dee Bost and Norris Cole. A blow came when JJ O’Brien was sent out.
Monaco simply wasn’t able to take back the game from here on and stayed firmly behind their opponents until the bitter end, with a disappointing 83-95 loss.
“In this context (without a crowd), basketball losses is less intense, less pressure,” Sasa Obradovic said after the game. “However, we lacked intensity to make the decisions. We failed to muzzle the dominant rear tonight. There are still many matches left, we are in the race to finish in the lead.”
Monaco’s next game is against Nanterre on Sunday.