The “Oscars of Sport” returns to Monaco

The “Oscars of Sport” returns to Monaco 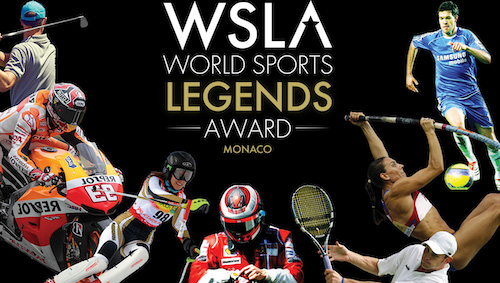 The World Sports Legends Awards will be holding its fourth annual event in early December in the Principality to celebrate the best athletes in the world.

Dubbed the “Oscars of Sport”, the best-of-the-best sports personalities from around the globe will be descending on Monaco the weekend of 6th and 7th December to receive recognition and awards for their pursuits. The main events, hosted in five languages, will take place at the Fairmont Hotel, with ancillary events being held at the Automobile Club of Monaco and the Sun Casino.

The WSLA also gives a posthumous award. This year’s legend has yet to be formally announced but was recently honoured in his home country by having the national sports stadium named after him.

The award is presented to athletes, both active and retired, who have gained recognition for their top-notch sports abilities and for their exemplary comportment, making them inspirational leaders as well as athletes. The selected athletes will join the Pantheon of World Sports Legends and will contribute casts of their handprints to be added to those who came before them. The prints will be on exhibit during the event.

A special addendum to the event, curated and produced by Promo Art Monte-Carlo Productions, is linking the world of sport to that of fashion, art and entertainment, creating a VIP red carpet event, hence the nickname the Oscars of Sport.

Friday 6th December is Media Day and the Cristal Galerie at the Fairmont will be host to talks and art exhibits from 12pm to 6pm. The party then moves to the Automobile Club of Monaco for a 7pm Press Conference followed by a cocktail event and dinner.

The following evening is the awards ceremony and gala dinner which starts at 8pm with a photo call on the red carpet. Dinner and the awards presentations will begin at 9pm and the evening winds up with a late night party and cocktail at the Sun Lounge at Sun Casino from midnight.