Home Sports Princely couple get in the selfie spirit for sport 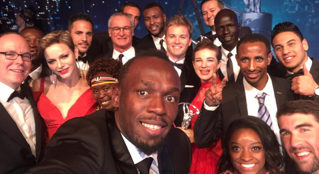 Some of the biggest names in sports attended the prestigious Awards Ceremony, which was first held in the Monaco in 2000, when, as HSH Prince Albert noted, “Nelson Mandela galvanised us all with his impassioned speech” during with the South African President said: “Sport has the power to change the world.”

Mr Mandela’s inspiration led to the formation of the Laureus Sport for Good Movement, which now includes 60 Laureus Academy Members and 200 Ambassadors.

Prince Albert commented, “Laureus is a worldwide recognised movement that teaches young people to discover the best in themselves and provides them with the tools and skills they need to succeed how difficult can be the circumstances.”

Five-time Olympic gold medallist in the pool, Missy Franklin, announced the first award of the evening – The Laureus Sportswoman of the Year – which went to fellow American, Simone Biles, 2016 Olympic individual all-around, vault and floor gold medallist. The award was given by legendary gymnast Nadia Comaneci and Prince Albert.

Laureus Academy Member Boris Becker presented the Laureus World Comeback of the Year to “the greatest swimmer ever” Michael Phelps, while Monaco’s pride and joy, the recently-retired Nico Rosberg, picked up The Laureus World Breakthrough of the Year Award from F1’s Emerson Fittipaldi.

Other winners included the Refugee Olympic Team (The Laureus Sport for Good Award for Sporting Inspiration), Leicester City FC (The Laureus Spirit of Sport Award) and Rachel Atherton (The Laureus World Action Sportsperson of the Year).

The evening was filled with touching stories, from Hugh Grant talking about the “amazing work of Laureus Sport for Good, changing the lives of millions of young people all over the world” to a tribute video to the legendary boxer Muhammad Ali, who died in June 2016.

Local News Cassandra Tanti - March 25, 2021
The Princess Charlene of Monaco Foundation will be a key supporter of the Love of the Game 2021 Hakathon, a new campaign to find solutions to mitigate the risk of head injuries in sports.