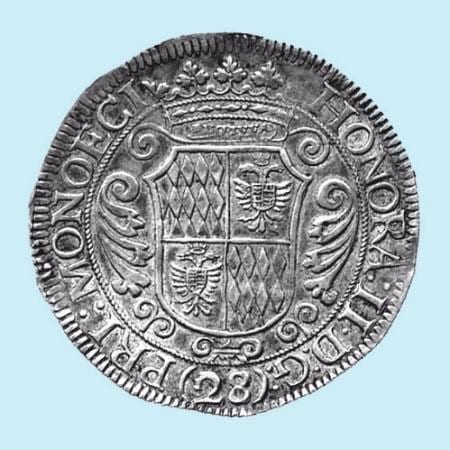 From 22nd to 25th October, the Museum of Stamps and Coins of Monaco will display coins used for trade during the time of Monegasque Princes Honoré II, who reigned from 1604 to 1662, and his grandson Louis I, who reigned from 1662 to 1701. The two leaders opened up trade and commercial development with the Ottoman Empire, then called the Levant and now reduced to modern day Turkey, and these coins are some of the remnants of that successful time.

The story behind the coins is fascinating and hinges upon the beautiful Princess of Dombes, a first cousin of both Honoré II and the French King Louis XIV. The French Minister of Finance at the time was one Nicholas Fouquet. He suggested they use an image of the Princess on coins used for monetary transactions with other nations, notably those in the Levant.

When the Turks saw these coins, they were so infatuated that they overvalued them and paid up to two times their issue value, thus making them a commodity. As a result, when Honoré II’s grandson Louis I took over, he devised a scheme with the Genoese and Tuscan lords of the Ligurian Coast to mint millions of small silver coins, lesser in cost but similarly with the Princess’s image and called luigini. These “knockoffs” were then highly circulated, making the creators a tremendous amount of money. The Ottomans finally cottoned on and banned the circulation of these poor quality coins in 1669-70.

To see these pieces of history in real life, visit the Museum of Stamps and Coins of Monaco located at the Terraces of Fontvieille The doors are open from 9.30am to 5pm.

Photo: ‘The Phoenix’ of Honoré II, two known copies, struck for the Levant, thought to be made for the marriage of the future Louis I. Museum of Stamps and Coins and Cabinet of Medals in Marseille.