Home Culture The Twin Bottles: Message in a Bottle 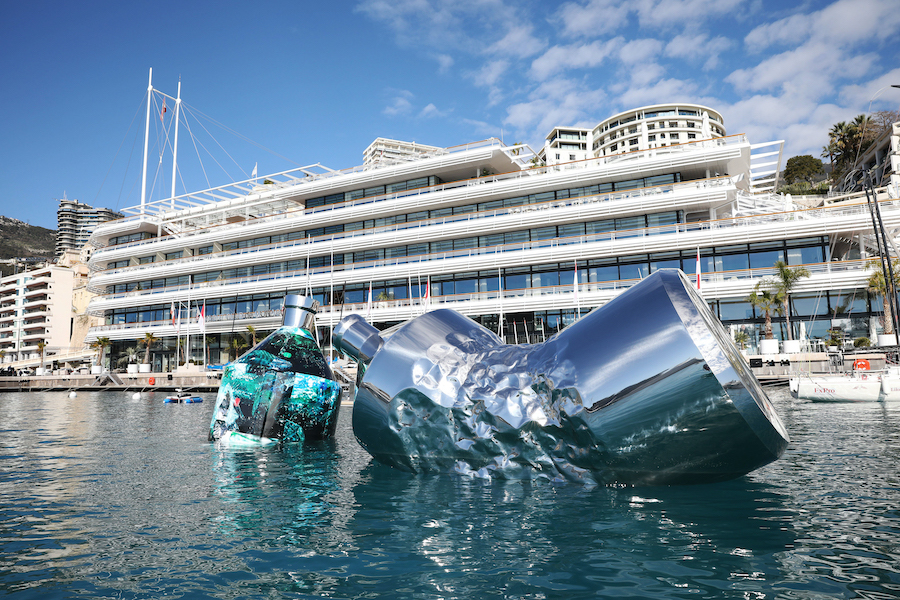 Two eye-catching artworks have appeared in waters below the Yacht Club of Monaco. ‘The Twin Bottles: Message in a Bottle’ is a new installation, condemning the plastic pollution of our oceans ahead of the upcoming Monaco Ocean Week, set to take place at the end of March.

‘The Twin Bottles: Message in a Bottle’, sponsored by Fondazione Gabriele and Anna Braglia, is the result of a collaboration between international sculptor Helidon Xhixha and young Swiss photographer Giacomo ‘Jack’ Braglia.

United in their desire to convey an important message about the impact of plastic bottle pollution on the oceans, the two decided to blend their artistic techniques – shaping steel and 3D photography.

The result is a large environmental installation imitating two crushed bottles floating on the water’s surface like discarded waste. One was modelled in stainless steel by sculptor Helidon Xhixha and then mirror polished, the other draped with photographic images of plastic waste taken by photographer Giacomo ‘Jack’ Braglia.

‘The Twin Bottles: Message in a Bottle’ is a site-specific environmental installation specially designed to remain in water. It can also be toured and, after its presentation in Venice on 20th July 2019, was in the prestigious garden of the Triennale Milano from October to December before taking position in the Port of Monaco and the Mediterranean Sea.

It will serve an important reminder during Monaco Ocean Week, which is due to take place from 22nd to 27th March – a week dedicated to the conservation of the marine ecosystem and to the sustainable development of the “blue” economy.