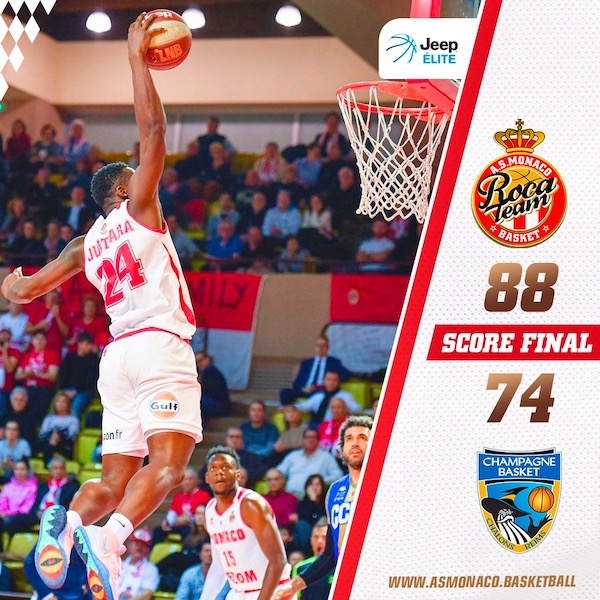 Roca Team has nabbed another victory at home in front of more than 200 fans, this time against Châlons-Reims Champagne Basketball on Tuesday night.
As Monaco Basketball plays to win, and win they do! In a very physical game against Châlons-Reims which saw both Eric Buckner and Will Yeguete with two fouls before the end of the first quarter, the Roca Team kept their offence as aggressive as their defence, though the game was evenly matched.
Early in the 2nd quarter, Buckner committed a third foul and was benched, but not before he helped put the team up by 30-24. Châlons-Reims played a very inside game, making it difficult for Monaco to keep too far ahead in the scoring, and by halftime, it was a tie at 43-43.
After play resumed, CCRB went on the attack, putting them four points up. It was at this critical moment that Norris Cole landed a three-point missile. This time the Roca Team wings and they made a huge push, scoring nine points in quick succession making it 52-47 in the 24th minute. Two minutes later Norris Cole made the difference by going for a superb “coast to coast” widening the gap to 58-49.
CCRB weren’t giving up, though. By the end of the third quarter, the lead shrunk to 64-60. It was now that Norris Cole went for it, and in just 10 minutes, scored an incredible 14 points. The Roca Team had the game all but sewn up, but this didn’t stop Dee Bost from landing two dazzling layups, ending the game with Monaco’s 28th straight win at home.
The final score was 88-74. Roca Team plays again on Valentine’s Day against Nanterre.