The winning photos of the Prince’s Environmental Awards

The winning photos of the Prince’s Environmental Awards 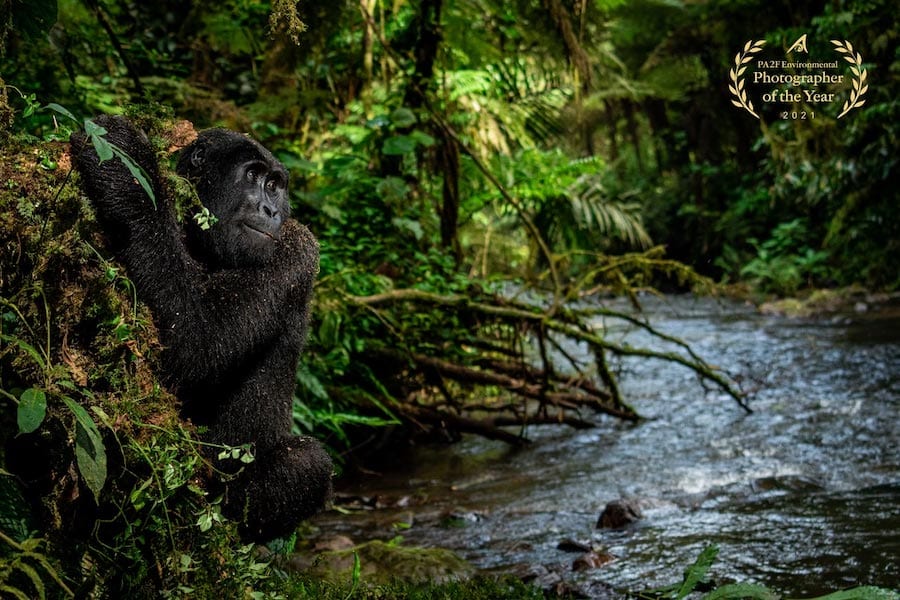 ‘Gorilla by the water’ by Kathleen Ricker has taken out the top prize in the inaugural Environmental Photography Award, a competition to commemorate the 15th anniversary of the Prince Albert II of Monaco Foundation.
Amateur and professional photographers from across the world were invited to submit their photos on the theme ‘Humanity and wildlife: crossed destinies, shared territories’ as part of the Foundation’s anniversary celebrations.
On 1st May, wildlife photographer Kathleen Ricker was named winner of the 2021 prize for her piece titled ‘Gorilla by the water’. The American photographer has been capturing wildlife in its natural environment and telling the animals’ story of survival since 2013. She is particularly fond of Ugandan mountain gorillas and has managed to photograph them during her regular treks.
“The photographer has perfectly captured the magic of the moment when the gorilla forgets her presence to concentrate on crossing the river in the heart of the sumptuous Ugandan forest,” said  Jean-Michel Krief, member of the jury and co-founder of the Sebitoli Chimpanzee Project.


Lincoln MacGregor’s ‘Enchanted Forest’ was named the winner in the Incredible Wildlife category for his photograph of bioluminescent mushrooms, which are only seen a few days a year, especially in the company of a wombat.

The winning photograph in the Wildlife in Crisis category, highlighting the negative impact that human activities are having on wildlife and the irrationality of our relationship towards it, was ‘Traces of life in the realm of death’. Photographer Maxim Sayapin captured the heart-breaking image of a nest woven from garbage on the Mediterranean coast of Israel.

The ‘Reasons for Hope’ category was won by Emmanuel Rondeau, a producer, writer and photojournalist specialising in wildlife conservation, for his photograph ‘The stag above the highway’. The shot reveals a suspended moment in time between two cohabitating worlds.

The general public was also invited to choose their favourite photographs via the Photocrowd platform.
The winners were ‘Hidden from sight’ by Mitchell Lewis in the Incredible Wildlife category, ‘Captive’ by Maxime Aliaga in the Wildlife in Crisis category, and ‘Love in the Jungle’ by Mathieu Courdesses in the Reasons for Hope category.


The grand prize winner receives a cash prize of €6,000 and a VIP invitation to the opening of the PA2F Environmental Photography Award exhibit, as well as the Foundation’s 15th anniversary events.

The winners of each category receive €1,000 each and the people’s choice winner gets €500. All shortlisted photographers will be featured  in the PA2F Environmental Photography Award book.


The best photographs from the competition are being presented in the Boulingrins Gardens until 1st June 2021.